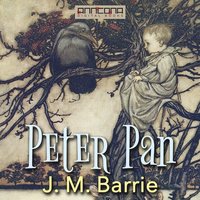 "All children, except one, grow up," begins J. M. Barrie's most famous novel. Barrie then proceeds to tell the story of that one extraordinary exception, Peter Pan, who lives in the Neverland with pirates and fairies and is always having adventures.

In both the play and the novel, Peter often visits the "real world" of London to listen in on bedtime stories told by Mary Darling to her children.

One night, Peter is spotted, and while trying to escape, he loses his shadow. On returning to claim his shadow, he wakes Mary's daughter, Wendy Darling.

When Wendy succeeds in re-attaching his shadow to him, Peter takes a fancy to her and invites her to Neverland to be a mother to his gang of Lost Boys, the children who are lost in Kensington Gardens.

Wendy agrees, and her brothers John and Michael go along. The dangerous and magical flight to Neverland is followed by many adventures.

They come face to face with a fairy named Tinker Bell, the Lost Boys, savages, pirates, mermaids, a crocodile that ticks, and Peter's nemesis--Captain Hook!

The book is filled with excitement, and wonder, and teaches that with happy thoughts, and a little help of pixy dust, you can fly! Peter Pan inspires children everywhere to believe! You know the story... and if you don't, please start listening immediately!

Peter Pan, or The Boy Who Wouldn"t Grow Up was first released as a stage play in 1904. In 1911 the play was adapted to a novel, and released under the title Peter and Wendy, also incorporating events of Barrie's sequel play, An Afterthought. This reading is the novel version from 1911.