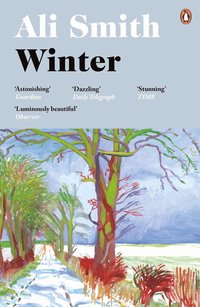 av Ali Smith
Häftad Engelska, 2018-10-04
119
Köp
Spara som favorit
Skickas inom 7-10 vardagar.
Fri frakt inom Sverige över 159 kr för privatpersoner.
Finns även som
Visa alla 2 format & utgåvor
Discover Ali Smith's dazzling, once-in-a-generation series, SEASONAL, a tour-de-force quartet of novels about love, time, art, politics, and how we live right now The final instalment in the Seasonal quartet is out in August 2020. Catch up with Winter now - Summer is coming... CHOSEN AS A BOOK OF THE YEAR by: The Times, Guardian, Observer, Daily Telegraph, Evening Standard, New York Times . . . 'Dazzling. Grief and pain are transfigured by luminous moments of humour, insight and connection . . . Even in the bleak midwinter, Smith is evergreen' Daily Telegraph From the Baileys Prize-winning, Man Booker-shortlisted author of Autumn and How to be both comes the unmissable second novel in Ali Smith's acclaimed 'Seasonal' quartet Winter? Bleak. Frosty wind, earth as iron, water as stone, so the old song goes. The shortest days, the longest nights. The trees are bare and shivering. The summer's leaves? Dead litter. The world shrinks; the sap sinks. But winter makes things visible. And if there's ice, there'll be fire. In Ali Smith's Winter, lifeforce matches up to the toughest of the seasons. In this second novel in her acclaimed Seasonal cycle, the follow-up to her sensational Autumn, Smith's shape-shifting quartet of novels casts a merry eye over a bleak post-truth era with a story rooted in history, memory and warmth, its taproot deep in the evergreens: art, love, laughter. It's the season that teaches us survival. Here comes Winter. 'Graceful, mischievous, joyful . . . Infused with some much-needed humour, happiness and hope' Independent 'A novel of great ferocity, tenderness and generosity of spirit . . . Luminously beautiful' Observer
Visa hela texten

With Iris and Lux as catalysts, scenes from Christmas past unfold, and our narrow views of Sophia and Art widen and deepen, filled with the secrets and substance of their histories, even as the characters themselves seem to expand. As in Sophia's case, for Art this enlargement is announced by a hallucination - "not a real thing," as Lux tells Iris, whose response speaks for the book's own expansive spirit: "Where would we be without our ability to see beyond what it is we're supposed to be seeing?" * The Minneapolis Star Tribune * These individuals converge to confront each other in the big shabby house, like characters in a Chekhov play. At first, hellish implosion looms. Slowly, erratically, connection creeps in. Lux quietly mediates. Ire softens. Sophia at last eats something. Art resees Nature..."Winter" gives the patient reader a colorful, witty - yes, warming - divertissement * San Francisco Chronicle * A sprightly, digressive, intriguing fandango on life and time * Kirkus Reviews * An engaging novel due to the ecstatic energy of Smith's writing, which is always present on the page * Publishers Weekly * The second in Smith's quartet of seasonal novels displays her mastery at weaving allusive magic into the tragicomedies of British people and politics...a bleak, beautiful tale greater than the sum of its references * Vulture * One of the rarest creatures in the world: a really fearless novelist...her prose is melodic, associative, wise, sometimes maddening...'she shares with Mantel and Ishiguro a sense of human caution, a need to understand, a wariness of the high-handedly authorial. All write with the humility of adulthood * Chicago Tribune * The stunningly original Smith again breaks every conceivable narrative rule; reflecting her longstanding affinity for Modernism, what she gives us instead is a stylistically innovative cultural bricolage that celebrates the ecstasy of artistic influence. It demands and richly rewards close attention. [Autumn and Winter] each add to Smith's growing collection of glittering literary paving stones, along a path that's hopefully leading toward the Nobel she deserves. In the interim, we can (re)read "Winter" - and eagerly await the coming of "Spring" * Minneapolis Journal Sentinel * Ali Smith is flat-out brilliant, and she's on fire these days...You can trust Smith to snow us once again with her uncanny ability to combine brainy playfulness with depth, topicality with timelessness, and complexity with accessibility while delivering an impassioned defence of human decency and art * NPR * Winter is a stunning meditation on a complex, emotional moment in history * TIME * The only preparation required to savor the Scottish writer Ali Smith's virtuosic "Winter" is to pay attention to the world we've recently been living in...What Smith has achieved in her cycle so far is exactly what we need artists to do in disorienting times: make sense of events, console us, show us how we got here, help us believe that we will find our way through...Smith gives us a potent, necessary source of sustenance that speaks directly to our age...Yet we, like her characters, are past the winter solstice now - the darkest part of the coldest season done. From here on out, we're headed toward the light...It doesn't feel that way, I know. But in the midst of "Winter," each page touched with human grace, you might just begin to believe * Boston Globe * Smith is routinely brilliant, knowing, masterful... The light inside this great novelist's gorgeous snow globe is utterly original, and it definitely illuminates * New York Times Book Review * "Winter" is an insubordinate folk tale, with echoes of the fiction of Iris Murdoch and Angela Carter... There are few writers on the world stage who are producing fiction this offbeat and alluring... [Ali Smith] intends to send a chill up your shanks and she succeeds, jubilantly... Her dialogue is a