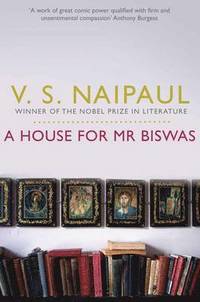 A House for Mr Biswas

av V S Naipaul
Häftad Engelska, 2011-04-01
129
Köp
Spara som favorit
Skickas inom 5-8 vardagar.
Fri frakt inom Sverige för privatpersoner.
Finns även som
Visa alla 6 format & utgåvor
"A work of great comic power qualified with firm and unsentimental compassion". (Anthony Burgess). "A House for Mr Biswas" is V. S. Naipaul's unforgettable fourth book and the early masterpiece of his brilliant career. Born the wrong way' and thrust into a world that greeted him with little more than a bad omen, Mohun Biswas has spent his forty-six years of life striving for independence. But his determined efforts have met only with calamity. Shuttled from one residence to another after the drowning of his father, for which he is inadvertently responsible, Mr Biswas yearns for a place he can call home. He marries into the domineering Tulsi family, on whom he becomes indignantly dependent, but rebels and takes on a succession of occupations in an arduous struggle to weaken their hold over him and purchase a house of his own. Heartrending and darkly comic, "A House for Mr Biswas" has been hailed as one of the twentieth century's finest novels and this triumph of resilience, persistence and dignity masterfully evokes a man's quest for autonomy against the backdrop of post-colonial Trinidad. "A marvellous prose epic that matches the best nineteenth-century novels". ("Newsweek").
Visa hela texten

V. S. Naipaul was born in Trinidad in 1932. He went to England on a scholarship in 1950. After four years at University College, Oxford, he began to write, and since then has followed no other profession. He has published more than twenty books of fiction and non-fiction, including Half a Life, A House for Mr Biswas, A Bend in the River and most recently The Masque of Africa, and a collection of correspondence, Letters Between a Father and Son. In 2001 he was awarded the Nobel Prize in Literature.