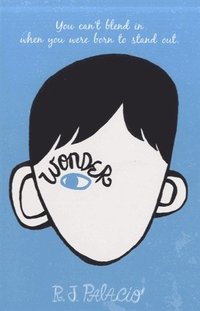 av R J Palacio
(7 röster)  |  Läs 2 recensioner
Häftad Engelska, 2013-01-03
9-12 år
99
Köp
Spara som favorit
Kan levereras innan julafton!
Finns även som
Visa alla 7 format & utgåvor
'Has the power to move hearts and change minds' Guardian 'Tremendously uplifting and a novel of all-too-rare power' Sunday Express 'An amazing book . . . I absolutely loved it. I cried my eyes out' Tom Fletcher Read the award-winning, multi-million copy bestselling phenomenon that is WONDER. 'My name is August. I won't describe what I look like. Whatever you're thinking, it's probably worse.' Auggie wants to be an ordinary ten-year-old. He does ordinary things - eating ice cream, playing on his Xbox. He feels ordinary - inside. But ordinary kids don't make other ordinary kids run away screaming in playgrounds. Ordinary kids aren't stared at wherever they go. Born with a terrible facial abnormality, Auggie has been home-schooled by his parents his whole life. Now, for the first time, he's being sent to a real school - and he's dreading it. All he wants is to be accepted - but can he convince his new classmates that he's just like them, underneath it all? A funny, frank, astonishingly moving debut - and a true global phenomenon - to read in one sitting, pass on to others, and remember long after the final page.
Visa hela texten

Remarkable . . . It has the power to move hearts and change minds * Guardian * Incredibly charming, brutal and brilliant * Observer * It wreaks emotional havoc . . . To finish it with a firm resolve to be a better person - well, you can't ask much more of any book than that * Independent * When the kids have finished with this, the adults will want to read it. Everybody should * Financial Times * Awesome . . . So authentic you'll swear a kid wrote the book. And yes, that's a good thing * Glamour *

R. J. Palacio was born and raised in New York City. She attended the High School of Art and Design and the Parsons School of Design, where she majored in illustration. She was a graphic designer and an art director for many years before writing her critically acclaimed debut novel, Wonder, which has been on the New York Times bestseller list since March 2012, sold over 16 million copies worldwide and been adapted into a movie. In addition to Wonder, R. J. has written Auggie & Me: Three Wonder Stories, 365 Days of Wonder, We're All Wonders and White Bird: A Wonder Story, which is soon to be a major motion picture. She lives in Brooklyn, New York with her husband, two sons and two dogs (Bear and Beau). Follow her on Twitter: @RJPalacio