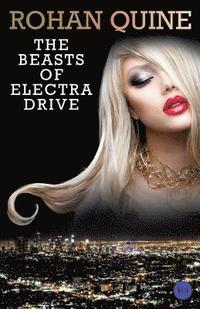 The Beasts of Electra Drive

"Technologically intelligent, socially clever, and supernaturally chilling - a trippy sci-fi tale. [...] There is a strong artistic element woven into this act of creation, allowing us to see how and why Jaymi creates each of his Beasts, giving them purpose and personality as well as form. [...] This is a book that would have been entirely serviceable with just the hacking and virtual reality interfaces, but what makes it really compelling is the ability for Jaymi's Beasts to step out into meat-space (I love that term) and take on corporeal form. These characters grow, learn, and even challenge their programming - they are somewhat childish in their willful independence, to the point of being sociopaths, although they demonstrate real emotion. There is some wonderful genderfluidity to some of the Beasts, with Shigem never feeling `quite like a boy, being half a gender to the left' and Scorpio whose `nature flowers with so transgender a beauty,' as well as a gay love affair between two Beasts who were created for one another. Lest you forget that this is a revenge fantasy, however, Amber is modeled after Rutger Hauer's character in The Hitcher, while Scorpio's defining moment is the fantasy of dominating an entire prison as the most dangerous boy in a skirt. [...] What really impressed me, however, is the flair for language, with some really beautiful - and beautifully chilling - passages that had me dog-earing pages along the way." - Sally Bend in Bending the Bookshelf "Quine describes [the Beasts'] release like a beautiful dance instead of a strategic infiltration. [...] The novel is a creative mashing together of Hollywood novel, science fiction, eroticism, and dystopia, with a premise that seems at once foreboding and prescient. While the book takes obvious science fictional liberties with technology, there is a real-world parable about superficiality versus authenticity. As the world becomes more digitally mechanized - and we are as much a product of our digital personae as our real-life personae - the book has an important message to tell about what it is to be truly human. [...] Quine obviously has a lot of affection for his Beasts, which has the same effect on the reader. He also injects humor throughout into what is at times a fairly dark storyline, replete with violence and seamy sexuality. In all, Quine has created a wholly unique look that will appeal to gamers and non-gamers alike. Most readers will empathize with the main character and his suboptimal working situation, and the steps he takes to get out from underneath a tyrannical and uninspiring boss. On a science fictional level, the novel works exceptionally well for its creative use of tech, mixed in with a group of highly imaginative characters. A prequel to five other works, The Beasts of Electra Drive will have readers seeking out Rohan Quine's other books in the series." - SPR "This novel is essentially near-future cyberpunk subtly blended with elements of LA noir and dystopic fiction to create a darkly stylish and, at times, visionary glimpse into humankind's future. [...] Richly described, the beasts are androgynous characters with full backstories, personalities, and idiosyncrasies. Unleashed upon the world, they allow Jaymi to achieve vengeance in ingenious ways. This is an intriguing premise, but the story's true power comes from its underlying theme: Humans can choose to live in the superficial, and underlying falseness, of tabloid reality (as gamers do when engaging in the novel's online game), or embrace the `complexity, unconventionality, beauty and subtlety of truth' of the world around them. Ultimately Jaymi's journey of self-discovery mirrors our own: We all seek happiness in the short time that we inhabit the `meat space' of this world." - BlueInk Review "Quine's narrative challenges the arbitrariness of commercial gate-keepers and the randomness of success - and has a lot of fun in the process. It's an odd m

Rohan Quine is an author of literary fiction with a touch of magical realism and a dusting of horror. He grew up in South London, spent a couple of years in L.A. and then a decade in New York, where he ran around excitably, saying a few well-chosen words in various feature films and TV shows, such as "Zoolander", "Election", "Oz", "Third Watch", "100 Centre Street", "The Last Days of Disco", "The Basketball Diaries", "Spin City" and "Law & Order: Special Victims Unit" (see www.rohanquine.com/those-new-york-nineties/film-tv). He's now living back in East London, as an Imagination Thief. In addition to its paperback format, his novel THE IMAGINATION THIEF is available as an ebook that contains links to film and audio and photographic content in conjunction with the text. See www.rohanquine.com/press-media/the-imagination-thief-reviews-media for some nice reviews in "The Guardian", "Bookmuse", "indieBerlin" and elsewhere. It's about a web of secrets triggered by the stealing and copying of people's imaginations and memories, the magic that can be conjured by images of people, the split between beauty and happiness, and the allure of power. Four novellas - THE PLATINUM RAVEN, THE HOST IN THE ATTIC, APRICOT EYES and HALLUCINATION IN HONG KONG - are published as separate ebooks, and also as a single paperback THE PLATINUM RAVEN AND OTHER NOVELLAS. See www.rohanquine.com/press-media/the-novellas-reviews-media for reviews of these novellas, including by Iris Murdoch, James Purdy, "Lambda Book Report" and "New York Press". Hunting as a pack, all four delve deep into the beauty, darkness and mirth of this predicament called life, where we seem to have been dropped without sufficient consultation ahead of time. His new novel THE BEASTS OF ELECTRA DRIVE is a prequel to the above five tales, and a great place to start. See www.rohanquine.com/press-media/the-beasts-of-electra-drive-reviews-media for reviews by "Kirkus", "Bookmuse", "Bending the Bookshelf" and others. From Hollywood mansions to South Central motels, havoc and love are wrought across a mythic L.A., through the creations of games designer Jaymi, in a unique explosion of glamour and beauty, horror and enchantment, celebrating the magic of creativity itself. www.rohanquine.com | facebook.com/RohanQuineTheImaginationThief | @RohanQuine | vimeo.com/rohanquine "Rohan Quine is one of the most original voices in the literary world today - and one of the most brilliant." -"Guardian" Books blogger Dan Holloway "The swooping eloquence of this book had me hypnotised. Quine leaps into pools of imagery, delighting in what words can do. The fact that the reader is lured into joining this kaleidoscopic, elemental ballet marks this out as something fresh and unusual. In addition to the language, two other elements make their mark. The seaside ghost town with echoes of the past and the absorbing, varied and rich cast of characters. It's a story with a concept, place and people you'll find hard to leave." -JJ Marsh, "Bookmuse" "Quine is renowned for his rich, inventive and original prose, and he is skilled at blending contemporary and ancient icons and themes." -Debbie Young, "Vine Leaves Literary Journal"