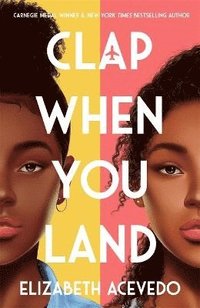 Clap When You Land

av Elizabeth Acevedo
(1 röst)
Häftad Engelska, 2020-05-05
108
Köp
Spara som favorit
Kan levereras innan julafton!
Finns även som
Visa alla 5 format & utgåvor
The stunning New York Times bestselling novel from the 2019 Carnegie Medal winning, Waterstones Book Prize shortlisted author of THE POET X. 2020 Goodreads Choice Award Winner of CLAP WHEN YOU LAND. Camino Rios lives for the summers when her father visits her in the Dominican Republic. But this time, on the day when his plane is supposed to land, Camino arrives at the airport to see crowds of crying people... In New York City, Yahaira Rios is called to the principal's office, where her mother is waiting to tell her that her father, her hero, has died in a plane crash. Separated by distance - and Papi's secrets - the two girls are forced to face a new reality in which their father is dead and their lives are forever altered. And then, when it seems like they've lost everything of their father, they learn of each other. In a dual narrative novel in verse that brims with both grief and love, award-winning and bestselling author Elizabeth Acevedo writes about the devastation of loss, the difficulty of forgiveness, and the bittersweet bonds that shape our lives.
Visa hela texten

Eloquent, moving and suspenseful * The Sunday Times, Book of the Week * An impressive and moving read * The Irish Times * Transporting and powerful. * Guardian * [An] unforgettable portrait of grief, loss and forgiveness * Observer * Memorable for its treatment of grief, depiction of family ties, and lyrical strength, * The Booklist * This story is blessed with...divinely piercing language throughout... Overflowing with truths of the heart...I can't praise this highly enough * LoveReading4Kids * A simultaneously heart-breaking and heartening novel * Culturefly * A powerfully tender story about cultural identity, family secrets and sisterhood - I adored Acevedo's pitch perfect poetic prise - what a treat! * Jasbinder Bilan, author of Asha and the Spirit Bird * This exceptionally talented writer portrays the grief and aspirations of two very different girls with great empathy and insight. * The Observer * Interestingly, a number of remarkable writers for young adults (whose work transcends age boundaries) use atypical forms of writing to create outstanding stories that are adored by readers and critics alike. Take Elizabeth Acevedo, for example, whose Clap When You Land and The Poet X use an exhilarating, engaging, free-form novel-in-verse approach. * Love Reading * A soul-healing novel-in-verse in which sisters separated by the Atlantic are united by grief for the father they never knew they shared. From the multi-award-winning author of The Poet X and With the Fire on High comes Elizabeth Acevedo's exceptional dual-voiced novel about loss, love and sisterhood across the sea, a story partly sparked by the fatal crash of a flight from NYC to Santo Domingo in 2001. Camino Rios has always lived in the Dominican Republic with her aunt Tia, "a woman who speaks to the dead, who negotiates with spirits", a woman who's like a mother to her: "Even when Mama was alive, Tia was the other mother of my heart." Life's not easy for them on the island, but they have it better than their neighbours as a result of Camino's beloved Papi working in the US for most of year. To Camino, Papi is a "A king who built an empire so I'd have a throne to inherit", and she lives for the summer months when he comes home to them. But all life is thrown into terrible disarray when she goes to meet Papi at the airport and learns that his plane has fallen from the sky, and then: "I am swallowed by this shark-toothed truth." This story is blessed with such divinely piercing language throughout. At the same time, across the Atlantic, Yahaira Rios learns that her hero Papi has died in a plane crash. She already knew he had a wife on the island (but not of his secret daughter), and has always longed to reconcile her Dominican heritage with her American life: "Can you be from a place you have never been? You can find the island stamped all over me, but what would the island find if I was there? Can you claim a home that does not know you, much less claim you as its own?" When it emerges that Papi wishes to be buried back in DR, Yahaira's Mami insists that she will never let her "touch foot on the sands of that tierra." But Yahaira has other plans, not least when she's contacted by a girl named Camino Rios who bears an undeniable resemblance to Papi, and to her too. As well as being exceptionally affecting on grief, forgiveness and family secrets, Clap When You Land is also devastatingly sharp on the exploitative tendencies of tourism. In Camino's words: "I am from a playground place...Our land, lush and green, is bought and sold to foreign powers so they can build luxury hotels...Even the women, girls like me, our mothers and tias, our bodies are branded jungle gyms...Who reaps? Who eats? Not us. Not me." Overflowing with truths of the heart, and truths about inequalities that need to be broken, while also addressing the complexities of what it means to be of a place, I can't praise this highly

Elizabeth Acevedo is the New York Times bestselling and 2019 Carnegie Medal winning author of THE POET X. She is also the winner of the 2018 National Book Award for Young People's Literature, The Printz Award for Excellence in Young Adult Fiction, the Boston Globe-Hornbook Award Prize for Best Children's Fiction and the Pura Belpre Award for a work that best affirms the Latinx cultural experience. She holds a BA in Performing Arts from The George Washington University and an MFA in Creative Writing from the University of Maryland. Acevedo has been a fellow of Cave Canem, Cantomundo, and a participant in the Callaloo Writer's Workshops. She is a National Poetry Slam Champion and resides in Washington, DC with her partner.