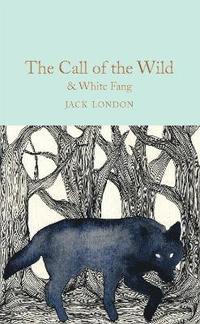 The Call of the Wild &; White Fang

av Jack London
Inbunden Engelska, 2017-09-21
117
Köp
Spara som favorit
Skickas inom 10-15 vardagar.
Fri frakt inom Sverige över 159 kr för privatpersoner.
Finns även som
Visa alla 7 format & utgåvor
A major motion picture starring Karen Gillan and Harrison Ford. Extraordinary both for the vividness of their descriptions and the success with which they imagine life from a non-human perspective, these two classics of children's literature are two of the greatest and most popular animal stories ever written. Part of the Macmillan Collector's Library, a series of stunning, clothbound, pocket-sized classics with gold-foiled edges and ribbon markers. These beautiful books make perfect gifts or a treat for any book lover. This beautiful Macmillan Collector's Library edition of The Call of the Wild & White Fang features an afterword by Sam Gilpin. The Call of the Wild tells the story of Buck, a domestic dog who is kidnapped from his home in California and forced to pull sleds in the Arctic wasteland. White Fang, by contrast, is the tale of a crossbreed who is three-quarters wolf and a quarter dog, and who must endure considerable suffering in the wilderness before being tamed by an American and taken to live in California.
Visa hela texten

Bloggat om The Call of the Wild &; White Fang

Jack London was born in San Francisco on 12 January 1876, the unwanted child of spiritualist and music teacher Flora Wellman. He was raised by Virginia Prentiss, a former slave, before rejoining his mother and her new husband, John London. Largely self-educated, the teenage Jack made money stealing oysters and working on a schooner before briefly studying at the University of Berkeley in 1896. He left to join the Klondike Gold Rush a year later, a phenomenon that would go on to form the background of his literary masterpieces, The Call of the Wild (1903) and White Fang (1906). Alongside his novel-writing, London dabbled in war reportage, agriculture and politics. He was married twice and had two daughters from his first marriage. London died in 1916 from complications of numerous chronic illnesses.