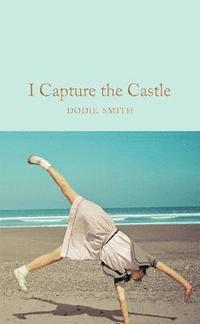 I Capture the Castle

av Dodie Smith
Inbunden Engelska, 2017-09-21
116
Köp
Spara som favorit
Finns även som
Visa alla 8 format & utgåvor
One of BBC's 100 Novels That Shaped Our World. A wonderfully quirky coming-of-age story, I Capture the Castle by Dodie Smith, author of The Hundred and One Dalmatians is an affectionately drawn portrait of one of the funniest families in literature. Part of the Macmillan Collector's Library; a series of stunning, clothbound, pocket sized classics with gold foiled edges and ribbon markers. These beautiful books make perfect gifts or a treat for any book lover. This edition is illustrated by Ruth Steed, and features an afterword by publisher Anna South. The eccentric Mortmain family have been rattling around in a vast, decrepit castle for years, gradually slipping into financial ruin. Mortmain is crippled by writer's block, while his beautiful second wife Topaz struggles to be a dutiful stepmother to Rose, Cassandra and Thomas. Rose needs a husband, Thomas an education but Cassandra lives for her writing. Through her gloriously witty and shrewd diaries, she chronicles the trials of family life, the impact on their prospects of the arrival of a glamorous American family, and the agonies of falling in love for the first time.
Visa hela texten

Dodie Smith was born in Lancashire in 1896. She trained at RADA and went on to carve out a career as both a novelist and a playwright, producing seven novels and ten plays. She wrote I Capture the Castle during the Second World War while living in America with her husband, and it was a great commercial and critical success when published in 1949. Some seven years later her children's classic, The Hundred and One Dalmatians - inspired by her own beloved Dalmatian, Pongo - was published. It remains the work for which she is probably most well-known, in large part thanks to the iconic Walt Disney film based on it. Dodie Smith died in 1990.