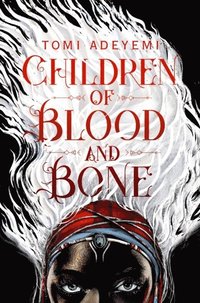 Children of Blood and Bone

av Tomi Adeyemi
(2 röster)  |  Läs 1 recension
Häftad Engelska, 2018-03-08
91
Köp
Spara som favorit
Finns även som
Visa alla 1 format & utgåvor
Winner of the Tonight Show Summer Reads with Jimmy Fallon. Tomi Adeyemi conjures a stunning world of dark magic and danger in her West African-inspired fantasy debut Children of Blood and Bone. They killed my mother. They took our magic. They tried to bury us. Now we rise. Zelie remembers when the soil of Orisha hummed with magic. When different clans ruled - Burners igniting flames, Tiders beckoning waves, and Zelie's Reaper mother summoning forth souls. But everything changed the night magic disappeared. Under the orders of a ruthless king, anyone with powers was targeted and killed, leaving Zelie without a mother and her people without hope. Only a few people remain with the power to use magic, and they must remain hidden. Zelie is one such person. Now she has a chance to bring back magic to her people and strike against the monarchy. With the help of a rogue princess, Zelie must learn to harness her powers and outrun the crown prince, who is hell-bent on eradicating magic for good. Danger lurks in Orisha, where strange creatures prowl, and vengeful spirits wait in the waters. Yet the greatest danger may be Zelie herself as she struggles to come to terms with the strength of her magic - and her growing feelings for an enemy. The movie of Children of Blood and Bone is in development at Fox 2000/Temple Hill Productions with the incredible Karen Rosenfelt and Wyck Godfrey (Twilight, Maze Runner, The Fault In Our Stars) producing it.
Visa hela texten

Black Girl Magic indeed! It's no surprise that this epic trilogy opener has already been optioned for film. Full of cinematic action sequences (the most memorable of them set underwater and employing an army of the dead) and creatures worthy of Star Wars (horse-sized 'lionaires' have saber teeth and horns), it storms the boundaries of imagination. Yet it also confronts the conscience. Adeyemi's brutally depicted war between the noble, lighter-skinned kosidans, and the enslaved, darker-skinned majis poses thought-provoking questions about race, class, and authority that hold up a warning mirror to our sharply divided society. * The New York Times * Infused with rich mythology of west Africa, Adeyemi's lush world-building and consummate plotting breathes new life into a YA fantasy epic. Themes of oppression and racism resonate all too strongly in today's political climate. The cliffhanger ending may leave some readers reeling but, rest assured, this is first in a trilogy. * Observer * Epic fantasy YA debut of magic and war. * Guardian * Tomi Adeyemi has created a lush, vibrant world, full of legend and lore, more than enough to sate even the most ravenous fantasy fan. She deserves special commendation for steering away from the creatures so often shoe-horned into fantasy novels, and instead creating her own magical beasts, who fit seamlessly into the narrative. There are swoony moments, shocking moments, terrifying moments, and heartbreaking moments. It's a masterful debut, and one many readers will adore. -- Melinda Salisbury, author <i>Sin Eater's Daughter</i> This highly anticipated fantasy novel earned its 23-year-old Nigerian-American author a seven-figure deal. The first instalment of a three-part young adult trilogy, it draws on African myth and folklore and was reportedly inspired by the Black Lives Matters movement. The film rights were snapped up before the book was even published. * Irish Independent * In one of the most highly-anticipated fantasy releases this year, Tomi Adeyemi spins a luxe tale of magic, adventure, and forbidden love. Zelie lives in a world once ruled by magic, but mass-murders decreed by a new king have all but stamped her people out, and she has a narrow window to bring the magic of her lands back to life. Fans of Leigh Bardugo and Game of Thrones will gobble this up. * BuzzFeed * Epic in scale and size... it's a whirlwind read thanks to immersive world-building, powerful characters and ferocious plotting. Themes of prejudice and oppression are particularly poignant in the current political climate. * The Bookseller * The Harry Potter I should have had. * MostlyLit Podcast * All our bookselling instincts tell us Children of Blood and Bone is a book apart. Posted to YouTube, author Tomi Adeyemi's surge of tearful joy at seeing her debut in the flesh instantly went viral, lending something very real and important to the long journey of her novel finally finding print. This is a tale brimming with courage, injustice, magic and star-crossed love, as young Zelie comes to terms with the extraordinary gifts she has been forced to keep hidden and the revenge that burns in her heart. With sweeping, prescient themes of race and heritage, Children of Blood and Bone is poised to be the breakout YA hit of 2018. * Waterstones Loves * This year's big fantasy breakout... [an] epic story of family, love and magic. * Stylist * A hugely enjoyable escapist story that makes you re-examine the world around you. It is a miraculous achievement. -- Kiran Millwood Hargrave * Guardian * Hugely gripping and original... Three perspectives, complex world-building and superlative characterisation make this a must for fantasy fans. -- Imogen Russell Williams * Metro * This book gripped me from page one. The magic, the characters and raw history in this book blew me away. Adeyemi's world building is fantastic, I felt completely immersed in the savage yet beautiful world of Orisha that Zelie lives in." [...] The

Tomi Adeyemi is a Nigerian-American writer and creative writing coach based in San Diego, California. After graduating Harvard University with an honors degree in English literature, she received a fellowship that allowed her to study West African mythology, religion, and culture in Salvador, Brazil. Her first novel is Children of Blood and Bone. When she's not working on her novels or watching BTS music videos, she can be found blogging and teaching creative writing on her website.