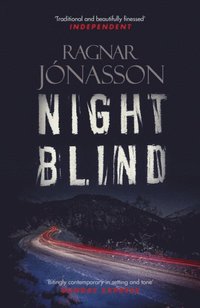 av Ragnar Jonasson
E-bok (EPUB - DRM), Engelska, 2015-12-01
90
Ladda ned
Spara som favorit
Laddas ned direkt
Läs i vår app för iPhone och iPad
Finns även som
Visa alla 3 format & utgåvor
THE FIFTH INSTALMENT IN THE INTERNATIONAL BESTSELLING DARK ICELAND SERIESOVER A MILLION COPIES SOLD When a police officer is murdered in the dead of night, in the isolated Icelandic town of Siglufjorur, Ari Thor Arason faces a complex investigation that takes him back to the past, and some sinister secrets...'A modern take on an Agatha Christie-style mystery' Ian Rankin'Bitingly contemporary in setting and tone' Sunday Express'Seductive ... Ragnar does claustrophobia beautifully' Ann Cleeves________________Siglufjorur: an idyllically quiet fishing village on the northernmost tip of Iceland, accessible only via a small mountain tunnel.Ari Thor Arason: a local policeman, whose tumultuous past and uneasy relationships with the villagers continue to haunt him.The peace of this close-knit community is shattered by the murder of a policeman - shot at point-blank range in the dead of night in a deserted house. With a killer on the loose and the dark arctic winter closing in, it falls to Ari Thor to piece together a puzzle that involves tangled local politics, a compromised new mayor, and a psychiatric ward in Reykjavik, where someone is being held against their will.Then a mysterious young woman moves to the area, on the run from something she dare not reveal, and it becomes all too clear that tragic events from the past are weaving a sinister spell that may threaten them all.Dark, chilling and complex, Nightblind is an extraordinary thriller from an undeniable new talent. ________________'Traditional and beautifully finessed' Independent'This is an atmospheric portrayal of a claustrophobic place where everyone is connected' Laura Wilson, Guardian'Jonasson plants clues fairly before a devastatingly unexpected reveal, without sublimating characterization to plot' Publishers Weekly'A tiny, segregated town is a superb setting for a crime novel, and Jonasson exploits it well. He builds a layered mystery featuring a series of unhealthy secrets, and past crimes buried deep in the sheltered, almost claustrophobic recesses of family life' Crime Thriller Journal'A must-read addition to the growing canon of Iceland Noir' Peter James'Ragnar has Nordic Noir down pat - a remote small-town mystery that is sure to please crime-fiction aficionados' Yrsa Sigurardottir'A challenging investigation that uncovers local secrets and Scandi-noir meets oldfashioned murder mystery in an atmospheric whodunnit' Daily Express'Jonasson's books have breathed new life into Nordic noir' Sunday Express'What really makes Nightblind stand out is its vivid cast of characters, whose fears, ambitions, rivalries and longings are movingly universal' Oprah magazine
Visa hela texten