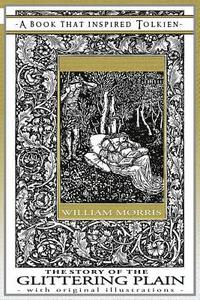 The Story of the Glittering Plain - A Book That Inspired Tolkien

The famous 19th century English designer, artist and writer William Morris had an enormous influence on Professor J.R.R. Tolkien, author of The Lord of the Rings and The Hobbit.

Tolkien  was two years old when the illustrated edition of The Glittering Plain was published in 1894, complete with decorated borders and capitals by Morris and richly detailed woodcuts by Walter Crane. This new edition is a close replica of that very book, with more than 700 exquisite graphic images woven into the layout. The story is a fantasy, telling of the journey of Hallblithe, a young man on an epic quest to rescue his love.

During Tolkien?s youth he read Morris?s works, enjoying both the stories and the pictures. Fantasy and medieval literature specialist Douglas A. Anderson writes in ?Tales Before Tolkien: The Roots of Modern Fantasy?, ?William Morris was an enormous influence on Tolkien in terms of the general shape of his literary interests. Tolkien discovered Morris?s translations in his teens, and his interest in Morris deepened at Exeter College, Oxford, where Morris had also been an undergraduate. Tolkien?s earliest stories of his Middle Earth legendarium, published posthumously as The Book of Lost Tales, show a decided influence of Morris in their archaism and style.?

When Tolkien was twenty-two he revealed, in a letter to his sweetheart Edith (later his wife), ?Amongst other work I am trying to turn one of the short stories [of the Finnish Kalevala] ... into a short story somewhat on the lines of Morris?s romances with chunks of poetry in between.?

In 1960 he was still acknowledging his debt of inspiration to Morris, noting, ?The Lord of the Rings was actually begun, as a separate thing, about 1937, and had reached the inn at Bree, before the shadow of the second war. . . . The Dead Marshes and the approaches to the Morannon owe something to Northern France after the Battle of the Somme. They owe more to William Morris and his Huns and Romans, as in The House of the Wolfings or The Roots of the Mountains.?

Mary Podles, in her article ?Tolkien & the New Art: Visual Sources for The Lord of the Rings?, says, ?We know from Tolkien?s letters and various commentaries that [William] Morris?s literary works had a profound influence on Tolkien??

'The Story of the Glittering Plain' is one of several William Morris works known to have inspired J.R.R. Tolkien?s creation of 'The Hobbit' and 'The Lord of the Rings'.
Visa hela texten

"the tale is set in fictional nordic lands (and seas) of a fictional past that roughly corresponds to the real era of viking conquests. ... although it is a fantasy, magic is all hidden around the edges and it comes off more as an adventure yarn than as a swords & sorcery precursor. ...i consider reading it worthwhile and i think it would make a worthy addition to the library of anyone else who is collecting early works of fantasy. this edition contains the original woodcut illustrations, which are a great supplement to the story."

William Morris (24 March 1834 - 3 October 1896) was an English textile designer, artist, writer, and libertarian socialist associated with the Pre-Raphaelite Brotherhood and English Arts and Crafts Movement. He founded a design firm in partnership with the artist Edward Burne-Jones, and the poet and artist Dante Gabriel Rossetti which profoundly influenced the decoration of churches and houses into the early 20th century. As an author, illustrator and medievalist, he helped to establish the modern fantasy genre, and was a direct influence on postwar authors such as J. R. R. Tolkien. He was also a major contributor to reviving traditional textile arts and methods of production, and one of the founders of the Society for the Protection of Ancient Buildings, now a statutory element in the preservation of historic buildings in the UK. Morris wrote and published poetry, fiction, and translations of ancient and medieval texts throughout his life. [Wikipedia]

i:    of those three who came unto rallblithe to the rouse of the raven    1

Viii:    Hallblithe taketh ship again away from the Isle of Ransom    47

Xiii:    Hallblithe beholdeth the woman who loveth him     77

Xx:    So now saileth Hallblithe away from the Glittering Plain     125