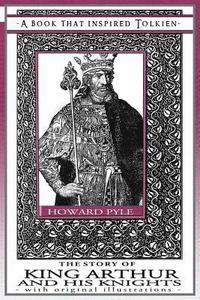 Professor J.R.R. Tolkien, author of The Lord of the Rings and The Hobbit, greatly enjoyed Arthurian stories, which he called ?powerful?. In fact, it was he who translated ?Sir Gawain and the Green Knight? (a 14th-century romance about one of Arthur's knights) into modern English. So profoundly did the legends of King Arthur move Tolkien that a few years before he wrote ?The Hobbit? he began to compose a poem in alliterative verse, entitled ?The Fall of Arthur?. Literary researchers have found several parallels between the Arthurian legends and ?The Lord of the Rings?. In her new introduction, Dart-Thornton discusses these similarities. It was 1903 when Howard Pyle?s beautifully illustrated ?The Story of King Arthur and his Knights? was first published. At the time, J.R.R. Tolkien was an eleven year old boy. This new edition is ornamented with the original pictures printed in the first edition - close to 150 gorgeous illustrations. With what relish must young Tolkien have seized upon this new version of the timeless legend, complete with captivating drawings! And how eagerly must that young mind have soaked up the heroic visions that would later help shape Middle-earth in ?The Lord of the Rings?.
Visa hela texten

Bloggat om The Story of King Arthur and His Knights ...

Howard Pyle (March 5, 1853 - November 9, 1911) was an American illustrator and author, primarily of books for young people. A native of Wilmington, Delaware, he spent the last year of his life in Florence, Italy. In 1894 he began teaching illustration at the Drexel Institute of Art, Science and Industry (now Drexel University). After 1900, he founded his own school of art and illustration, named the Howard Pyle School of Illustration Art. The scholar Henry C. Pitz later used the term Brandywine School for the illustration artists and Wyeth family artists of the Brandywine region, several of whom had studied with Pyle.[1] Some of his more notable students were N. C. Wyeth, Frank Schoonover, Elenore Abbott, Ethel Franklin Betts, Anna Whelan Betts, Harvey Dunn, Clyde O. DeLand, Philip R. Goodwin, Violet Oakley, Ellen Bernard Thompson Pyle, Olive Rush, Allen Tupper True, Elizabeth Shippen Green, and Jessie Willcox Smith. His 1883 classic publication The Merry Adventures of Robin Hood remains in print, and his other books, frequently with medieval European settings, include a four-volume set on King Arthur. He is also well known for his illustrations of pirates, and is credited with creating what has become the modern stereotype of pirate dress. He published his first novel, Otto of the Silver Hand, in 1888. He also illustrated historical and adventure stories for periodicals such as Harper's Weekly and St. Nicholas Magazine. His novel Men of Iron was adapted as the movie The Black Shield of Falworth (1954).

the book of king arthur

The Winning of Kinghood

How Sir Kay did Combat in a Great Tournament at ­London Town and of How He Brake His Sword. Likewise, How Arthur Found a New Sword For Him.

How Arthur Twice Performed the Miracle of the Sword Before Sir Ector and of How His Birthright Was Discovered Unto Him.

How Several Kings and High Dukes Assayed to Draw the Sword Out of the Anvil and How They Failed. Likewise How Arthur Made the Assay and Succeeded Therein.

The Winning of a Sword

How There Came a Certain Wounded Knight Unto the Court of King Arthur, How a Young Knight of the King’s Court Sought To Avenge Him and Failed and How the King There upon Took That Assay Upon Himself.

How King Arthur Fought With the Sable Knight and How He Was Sorely Wounded. Likewise How Merlin Brought Him Safe Away From the Field of Battle.

How King Arthur Found a Noble Sword In a Very Wonderful Manner. And How He Again Fought With It and Won That Battle.

The Winning of a Queen

How King Arthur Went to Tintagalon with Four of His Court, and How He Disguised Himself for a Certain Purpose.

How King Ryence Came to Cameliard and How King Arthur Fought With the Duke of North Umber.

How King Arthur Encountered Four Knights and of What Befell Thereby.

How the Four Knights Served the Lady Guinevere.

How King Arthur Overcame the Enemies of King Leodegrance, and How His Royalty Was Proclaimed.

How King Arthur Was Wedded in Royal State and How the Round Table Was Established.

The Book of Three Worthies

The Story of Merlin

How Queen Morgana le Fay Meditated Evil Against King Arthur and How She Sent a Damsel to Beguile the Enchanter, Merlin.

How Merlin Journeyed With Vivien Unto the Valley of Joyousness and How He Builded for Her a Castle at That Place. Also, How He Taught Her the Wisdom of Magic and of How She Compassed His Downfall Thereby.

How Queen Morgana le Fay Returned to Camelot and to the Court With Intent to Do III to King Arthur. Also How King Arthur and Others Went a-Hunting and of What Befell Thereby.

What Befell Sir Accalon, and How King Arthur Fought an Affair- at-Arms With Swords, and How He Came Nigh to Losing His Life Thereby.

The Story of Sir Pellias

How Queen Guinevere Went a-Maying and of How Sir Pellias Took Upon Him a Quest in Her Behalf.

How Sir Pellias Overcame a Red Knight, Hight Sir Adresack, and of How He Liberated XXII Captives From That Knight’s Castle.