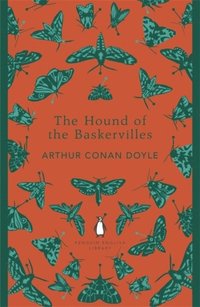 av Arthur Conan Doyle
(1 röst)
Häftad Engelska, 2012-12-06
83
Köp
Spara som favorit
Finns även som
Visa alla 9 format & utgåvor
The Penguin English Library Edition of The Hound of the Baskervilles by Arthur Conan Doyle "Mr Holmes, they were the footprints of a gigantic hound!" The terrible spectacle of the beast, the fog of the moor, the discovery of a body: this classic horror story pits detective against dog, rationalism against the supernatural, good against evil. When Sir Charles Baskerville is found dead on the wild Devon moorland with the footprints of a giant hound nearby, the blame is placed on a family curse. It is left to Sherlock Holmes and Doctor Watson to solve the mystery of the legend of the phantom hound before Sir Charles' heir comes to an equally gruesome end. The Hound of the Baskervilles gripped readers when it was first serialised and has continued to hold its place in the popular imagination. The Penguin English Library - 100 editions of the best fiction in English, from the eighteenth century and the very first novels to the beginning of the First World War.
Visa hela texten

Sir Arthur Conan Doyle (1859-1930) was born in Edinburgh and studied medicine at the university there, after an education in Jesuit schools in Lancashire and Austria. He had an active career as a doctor and opthalmologist, including volunteering in Bloemfontein during the Boer War, but also in the public sphere as Deputy-Lieutenant of Surrey, writer of the widely read historical works and political pamphlets, vociferous opponent of miscarriages of justice and twice parliamentary candidate (although he was never elected). Yet it was for his brilliant creation of the first scientific detective, Sherlock Holmes, that he achieved great fame - so great that after he killed Sherlock off to concentrate more on his historical work, he was forced to bring the character back to life in The Hound of the Baskervilles. In later years, the Jesuit-educated Conan Doyle converted to Spiritualism, writing works such as The Coming of the Fairies, and was a friend of the magician Houdini. He died of a heart attack in 1930, at the age of seventy-one. The Five Orange-Pips and Other Cases is also published in the Penguin English Library.