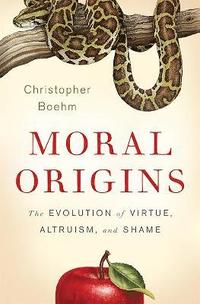 The Evolution of Virtue, Altruism, and Shame

av Christopher Boehm
Inbunden Engelska, 2012-05-01
414
Köp
Spara som favorit
From the age of Darwin to the present day, biologists have been grappling with the origins of our moral sense. Why, if the human instinct to survive and reproduce is"selfish," do people engage in self-sacrifice, and even develop ideas like virtue and shame to justify that altruism? Many theories have been put forth, some emphasizing the role of nepotism, others emphasizing the advantages of reciprocation or group selection effects. But evolutionary anthropologist Christopher Boehm finds existing explanations lacking, and in Moral Origins, he offers an elegant new theory. Tracing the development of altruism and group social control over 6 million years, Boehm argues that our moral sense is a sophisticated defence mechanism that enables individuals to survive and thrive in groups. One of the biggest risks of group living is the possibility of being punished for our misdeeds by those around us. Bullies, thieves, free-riders, and especially psychopaths- those who make it difficult for others to go about their lives- are the most likely to suffer this fate. Getting by requires getting along, and this social type of selection, Boehm shows, singles out altruists for survival. This selection pressure has been unique in shaping human nature, and it bred the first stirrings of conscience in the human species. Ultimately, it led to the fully developed sense of virtue and shame that we know today. A ground-breaking exploration of the evolution of human generosity and cooperation, Moral Origins offers profound insight into humanity's moral past- and how it might shape our moral future.
Visa hela texten

CHOICE "One rarely finds such a fully Darwinian, scientifically sound, and wisely accessible book for both professionals and lay audiences as Boehm's study of moral origins; it is far superior to any previous attempts to discuss the subject." Kirkus Reviews "Provocative" Jonathan Haidt, Professor of Psychology, University of Virginia, and author of The Righteous Mind "Astronomers have the Hubble telescope to look back through time, and social scientists have Chris Boehm. Boehm's monumental accomplishment is to give us the most careful and compelling portrait ever created of how our ancestors lived, from three hundred thousand generations ago to five hundred generations ago. Boehm's work is vital for understanding why we are so tribal, punitive, gossipy, religious, and cooperative today." Frans de Waal, author of The Age of Empathy "Few scientists have thought longer and harder about the origins of morality than Christopher Boehm, who brings to the issue a wealth of experience studying both humans and other animals. His thesis that our species has taken moral evolution into its own hands is new and refreshing. It overcomes conventional wisdom, which places emphasis solely on moral reasoning, as if the revolution in our understanding of emotions in human evolution had never happened." Nature "Ethologist and anthropologist Christopher Boehm exposes the roots of generosity and peer disapproval. Eschewing evolutionary game theory, he opts instead for natural selection within the social environment." New Scientist "What sets Boehm's approach apart is his effort 'to make the natural history of moral origins more historical'. In so doing he provides a new and coherent map of the evolution of morality... It is a complex story..., but Boehm's experience doing fieldwork with humans and wild chimps makes him a wonderfully knowledgeable guide. And some of his ideas are truly revolutionary." Booklist "How did evolution produce a species that blushes? To explain the uniquely human moral sense, Boehm teases a provocative neo-Darwinian theory out of cutting-edge archaeological, anthropological, and psychological research... Those looking for a daring new application of empirical science will find it here." Michael Shermer, Wall Street Journal "[A] provocative scientific contribution...to the millennia-long discussion about the nature of morality... Thinkers everywhere will be forced--as they are in many arenas--to consider biology in realms that once seemed strictly matters of the heart and soul." Publishers Weekly, starred review "[An] engrossing work... Boehm does a remarkable job of extending previous work and incorporating a historical approach. He deftly combines studies of earlier hominids with ethological work on primates and ethnographic analyses of contemporary human hunter-gatherer groups to offer a new explanation for moral behavior... His thesis, clearly articulated and well supported by available data, encompasses the egalitarian nature of most hunter-gatherer groups, their need to share large but rarely killed prey, and the human penchant for gossiping about the reputation of others... Boehm himself notes that this may not be the last word, but his ideas are provocative, thoughtful, and worth considering." Wilson Quarterly "Boehm marshals extensive evidence showing how hunter-gatherers use rigidly enforced social rules to suppress free riding today, providing a model for how our ancestors could have cooperated in a natural 'welfare state' that was crucial to their survival. A key new insight Boehm provides is that humans are both able and inclined to 'punish resented alpha-male behavior'... [Moral Origins] contains many important ideas." Donald Black, University Professor of the Social Sciences, University of Virginia, and author of Moral Time "Christopher Boehm's Moral Origins is a tour de force of a sort rarely seen in any s

Christopher Boehm is Director of the Jane Goodall Research centre and Professor of Anthropology and Biological Sciences at the University of Southern California in Los Angeles. Boehm's work has been featured in such publications as New Scientist, the New York Times, The Times (London), Natural History, Science News, and in films for National Geographic, Wild Kingdom, and the Discovery Channel. He has lectured widely to groups as diverse as the Human behaviour and Evolution Society, the Chicago Academy of Sciences, the Sante Fe Institute, the Los Angeles and Cincinnati Zoos, and the Naval War College. Boehm is the author of many scientific articles and several previous books, including Hierarchy in the Forest (Harvard). He divides his time between Los Angeles and Santa Fe.