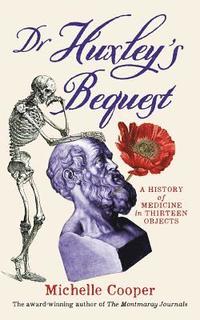 A History of Medicine in Thirteen Objects

av Michelle Cooper
Häftad Engelska, 2018-01-15
190
Köp
Spara som favorit
Finns även som
Visa alla 1 format & utgåvor
A mysterious bequest sends Rosy and Jaz on a race against time to identify thirteen strange and wonderful objects ? which turn out to tell the story of medicine, from the superstitions of ancient Egypt to the modern-day ethical dilemmas of genetic testing.

What secrets of the brain did Michelangelo conceal in his Sistine Chapel paintings?

Did a zombie discover the cure for scurvy?

Why did an Australian scientist decide to drink dangerous bacteria?

Did the bumps on Ned Kelly?s head predict his fate?

And how exactly did parachuting cats save a village from the plague?

An exploration of the beauty and power of scientific reasoning, for thoughtful readers aged twelve years and up, from the award-winning author of The Montmaray Journals.

‘Fascinating and thoroughly engrossing.’ Bulletin of the Center for Children’s Books, starred review

‘This meticulously researched book presents another great work from a stellar voice in historical fiction for young adults.’ 2011 Kids’ Indie Next List

‘Cooper’s engagement of politics and her quick, inventive wit give the book its own captivating originality.’ The Horn Book Magazine

‘A fascinating series that should be in every library.’ Read Plus

‘Historical fiction at its most engaging … highly recommended.’ Magpies

‘Cooper’s books are a great example of what YA fiction should be – as challenging and informative as they are entertaining.’ Wordcandy

Michelle Cooper is the author of 'The Rage of Sheep' and 'The Montmaray Journals' trilogy. The first Montmaray novel, 'A Brief History of Montmaray', won a NSW Premier's Literary Award and was listed in the American Library Association's 2010 Best Books for Young Adults. Its sequel, 'The FitzOsbornes in Exile', was shortlisted for the NSW and WA Premier's Literary Awards, named a Children's Book Council of Australia Notable Book and listed in Kirkus Reviews' Best Teen Books of 2011. The final book in the series, 'The FitzOsbornes at War', received starred reviews in Kirkus Reviews, Booklist and The Bulletin of the Center for Children's Books and was listed in Kirkus Reviews' Best Teen Books of 2012. Michelle has a science degree, worked as a speech pathologist for many years and is now a hospital administrator.

Visit www.michellecooper-writer.com for more information about Michelle and her books, including teaching resources.

‘I’m convinced that a controlled disrespect for authority is essential to a scientist.’

‘I have no special talents. I am only passionately curious.’

‘The scientific mind does not so much provide the right answers as ask the right questions.’

‘The deepest sin against the human mind is to believe things without evidence.’

‘Formerly, when religion was strong and science weak, men mistook magic for medicine …’

‘Science is nothing but trained and organised common sense.’

‘Chance favours only the prepared mind.’

‘Science is much more than a body of knowledge. It is a way of thinking.’

‘… now, when science is strong and religion weak, men mistake medicine for magic.’

‘Cured yesterday of my disease, I died last night of my physician.’

‘What is a weed? A plant whose virtues have not been discovered.’

‘In science, the credit goes to the man who convinces the world, not to the man to whom the idea first occurs.’

‘We’ve never had a woman in the laboratory before, and we think you’d be a distracting influence.’

‘It is a good morning exercise for a research scientist to discard a pet hypothesis every day before breakfast.’

‘Did science promise happiness? I don’t think so. It promised tru...