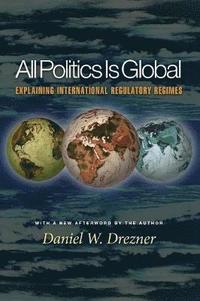 All Politics Is Global

av Daniel W Drezner
Häftad Engelska, 2008-09-07
219
Köp
Spara som favorit
Skickas inom 7-10 vardagar.
Fri frakt inom Sverige för privatpersoner.
Finns även som
Visa alla 1 format & utgåvor
Has globalization diluted the power of national governments to regulate their own economies? Are international governmental and nongovernmental organizations weakening the hold of nation-states on global regulatory agendas? Many observers think so. But in All Politics Is Global, Daniel Drezner argues that this view is wrong. Despite globalization, states--especially the great powers--still dominate international regulatory regimes, and the regulatory goals of states are driven by their domestic interests. As Drezner shows, state size still matters. The great powers--the United States and the European Union--remain the key players in writing global regulations, and their power is due to the size of their internal economic markets. If they agree, there will be effective global governance. If they don't agree, governance will be fragmented or ineffective. And, paradoxically, the most powerful sources of great-power preferences are the least globalized elements of their economies. Testing this revisionist model of global regulatory governance on an unusually wide variety of cases, including the Internet, finance, genetically modified organisms, and intellectual property rights, Drezner shows why there is such disparity in the strength of international regulations.
Visa hela texten

"Rewarding... Mr. Drezner ... finds that the challenges of the future will be increasingly transnational. As globalization intensifies, the rewards for coordination will increase as well."--Economist "Important... Drezner shows that it is control of their own large domestic markets that give major states the ability to wield power in the global economy. His main contribution, however, is to explode a popular notion of globalization and thereby to set an agenda for the study of global regulatory politics."--G. John Ikenberry, Foreign Affairs "All politics is global is a highly readable, authoritative, and well-investigated piece of political science literature on the globalization-global governance nexus. The explicit strength of the book is the logical and consistent development of the theory of regulatory outcomes, as well as the rigorous review of the scholarly literature. In this respect, it is strongly recommended to advanced graduate and doctoral students interested in the setting-up of game-theoretical models... [T]he detailed case studies enhance the book's attractiveness for a broader readership."--Jale Tosun, Cambridge Review of International Affairs "Among the many strengths of the book lie Drezner's skill in developing a clear and cogent analysis of state power in the global economy and the meticulous way he develops his argument for the key role state preference continues to play in international regulatory regimes... Drezner never wearies in his task of refining our understanding of international regulation and in providing a more lucid insight into the politics of great power preference. The result is a book that challenges popular notions of globalization by placing the power and interests of governments back into the centre stage of debate."--Stephen G. Hughes, International Affairs "All Politics is Global is a more than just a welcome contribution to current international relations scholarship... Drezner takes a fresh look at the role of the powerful states in governing the world economy. Using simple game-theory, he provides a convincing explanation for why the great powers (the US and the EU) have not lost their influential role. In doing so, the book makes a strong case against a growing literature in international relations that attributes a significant degree of agency to international organizations or transnational private actors in shaping international regulatory outcomes."--World Trade Review "Drezner makes an important contribution to the literature by bringing greater focus to the regulatory side of global governance in a small book that is well worth reading... Drezner is to be credited for bringing a much needed discussion about the global politics of the regulatory state to the forefront of International Relations theory and practice."--Rex B. Hughes, International Affairs "This is a detailed, scholarly book that explicates the arcane aspects of regulatory agreements. It won't crack the popular market. However, it will percolate and influence because it also explains quite well the 'big picture' elements of global trade and global regulation."--Austin Bay, Time Record News

Daniel W. Drezner is professor of international politics at the Fletcher School of Law and Diplomacy at Tufts University. He is the author of "U.S. Trade Strategy" and "The Sanctions Paradox" and has been published widely in scholarly journals as well as the "New York Times" and the "Wall Street Journal". He is a regular contributor to "Newsweek International" and NPR's "Marketplace". He keeps a daily Weblog at www.danieldrezner.com.