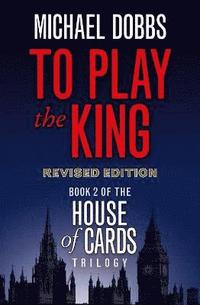 To Play the King

av Michael Dobbs
Häftad Engelska, 2010-05-30
119
Köp
Spara som favorit
Skickas inom 3-6 vardagar.
Fri frakt inom Sverige för privatpersoner.
Finns även som
Visa alla 2 format & utgåvor
The second book in the trilogy that inspired the hit Netflix series House of Cards After scheming his way to power in House of Cards, newly elected Prime Minister Francis Urquhart takes on the new King, The role of the monarchy in modern Britain comes under scrutiny as Prime Minister Francis Urquhart threatens to expose Royal secrets when his plans are blocked by the idealistic new King. Their differences of opinion quickly degenerate into open hostility. The battlefield ranges from architecture to the underprivileged; the battle is fought with rigged opinion polls, manipulated newspaper headlines, sexual scandal and economic brinkmanship as Urquhart sets out to destroy not only the King's family and friends but even the King himself. Continuing the dark tale of greed, corruption, and unquenchable ambition, To Play the King reveals that no matter the country, politics, intrigue and passion reign in the corridors of power. "This blood and thunder tale, lifelike and thoroughly cynical, certainly carries the ring of authenticity....a great triumph." The Independent"
Visa hela texten

Bloggat om To Play the King

Bestselling author Michael Dobbs was at Mrs Thatcher's side as she took her first step into Downing Street as Prime Minister and was a key aide to John Major when he was voted out. In between times he was bombed in Brighton, banished from Chequers and blamed for failing to secoure a Blair-Major television debate. He is now one of the country's leading political commentators.