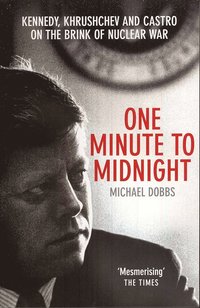 One Minute To Midnight

Kennedy, Khrushchev and Castro on the Brink of Nuclear War

av Michael Dobbs
(1 röst)
Häftad Engelska, 2009-04-02
149
Köp
Spara som favorit
Skickas inom 3-6 vardagar.
Fri frakt inom Sverige för privatpersoner.
Finns även som
Visa alla 1 format & utgåvor
October 27, 1962, a day dubbed Black Saturday in the Kennedy White House. The Cuban missile crisis is at its height, and the world is drawing ever closer to nuclear apocalypse. As the opposing Cold War leaders, John F. Kennedy and Nikita Khrushchev, mobilize their forces to fight a nuclear war on land, sea and air, the world watches in terror. In Bobby Kennedy's words, 'There was a feeling that the noose was tightening on all of us, on Americans, on mankind, and that the bridges to escape were crumbling.' In One Minute to Midnight Michael Dobbs brings a fresh perspective to this crucial moment in twentieth-century history. Using a wealth of untapped archival material, he tells both the human and the political story of Black Saturday, taking the reader into the White House, the Kremlin and along the entire Cold War battlefront. Dobbs's thrilling narrative features a cast of characters - including Soviet veterans never before interviewed by a western writer - with unique stories to tell, witnesses to one of the greatest mobilizations of men and equipment since the Second World War.
Visa hela texten

In this compelling - and thrilling - new study by Michael Dobbs, there is much new material that forces us to revise our assumptions about the crisis... This is the first book about the crisis to tell the story of the tactical cruise missiles and the first to contain interviews with Soviet veterans. Dobbs adopts a cinematic style, cross-cutting between locations and time zones, and perfectly judges the acceleration of pace in the second half of the book which concentrates on Black Sunday. Unlike previous writers, Dobbs gives due prominence to the subplots, any one of which might have sparked mass destruction -- Christopher Silvester * Daily Express * Dobb's hour-by-hour overview is a worthy study of this much mythologised fortnight . . . Dobb's chronological approach not only provides a natural sense of pace, but also allows him to illustrate the near-fatal time lag in communication between the two sides * Time Out * A book with sobering new information . . . as well as contemporary relevance . . . filled with insights that will change the views of experts -- Richard Holbrooke, former US ambassador to the UN * New York Times Book Review * [Dobbs] has made extensive use of untapped archive material to reveal the secrets of the cloak-and-dagger operations behind the nuclear stand-off in the Caribbean... Excellent -- John Crossland * Daily Mail * Mesmerising stuff ... a riveting hour-by-hour account of one day that could have changed the history of humanity -- Joanna Bourke * The Times *

Bloggat om One Minute To Midnight

Michael Dobbs is a reporter for the Washington Post, who devoted much of his journalistic career to covering the collapse of communism. He was the Post's bureau chief in Warsaw (1980-82), Paris (1983-86) and Moscow (1988-1993). He has held fellowships at Harvard and Princeton University and is the author of three books: Down with Big Brother (1996), Madeleine Albright (1999) and Saboteurs (2004). Down with Big Brother was a runner-up for the 1997 PEN award for non-fiction.