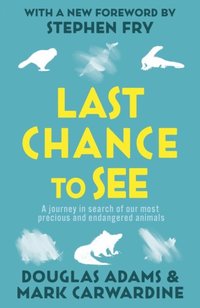 av Douglas Adams, Mark Carwardine
(5 röster)  |  Läs 2 recensioner
Häftad Engelska, 2009-09-10
151
Köp
Spara som favorit
Finns även som
Visa alla 3 format & utgåvor
'Descriptive writing of a high order... this is an extremely intelligent book' The Times Join Douglas Adams, bestselling and beloved author of The Hitchhiker's Guide to the Galaxy, and zoologist Mark Carwardine on an adventure in search of the world's most endangered and exotic creatures. In this book, Adams' self-proclaimed favourite of his own works, the pair encounter animals in imminent peril: the giant Komodo dragon of Indonesia, the lovable kakapo of New Zealand, the blind river dolphins of China, the white rhinos of Zaire, the rare birds of Mauritius island in the Indian Ocean and the alien-like aye-aye of Madagascar. Inimitably witty and poignant, Last Chance to See is both a celebration of our most extraordinary creatures and a warning about what we have to lose if we do not act soon. Featuring a fantastic new foreword by the authors' long-time friend Stephen Fry, and an afterword from Mark Carwardine that considers what has changed since the book was first published, Last Chance to See feels more urgent than ever before. 'Douglas Adams' genius was in using comedy to make serious points about the world' Independent
Visa hela texten

Last Chance to See brings out the best in Adams' writing ... constantly springing on the reader the kind of dizzying shift in perspective that was the stock in trade of Hitchhiker' * The Listener * It is a book one reads in a rush, always looking forward to the next perverse paragraph, wise insight or felicitous phrase * The Canberra Times * This is life or death stuff, but Adams is a writer who chooses not to shake his finger at the reader. He fails completely in the self-righteous-piety department. Instead he invites us to enter a conspiracy of laughter and caring * Los Angeles Times * In every case, the presence and personality of the endangered animals rise off the page - even when the authors don't manage to find them. The writing may be witty, but this book is a sobering reminder of what a very great deal we have to lose * Independent on Sunday * Descriptive writing of a high order ... this is an extremely intelligent book * The Times *

Douglas Adams (Author) DOUGLAS ADAMS was born in Cambridge in March 1952. He is best known as the creator of The Hitchhiker's Guide to the Galaxy, which started life as a BBC Radio 4 series. The book went on to be a No. 1 bestseller. He followed this success with The Restaurant at the End of the Universe (1980); Life, The Universe and Everything (1982); So Long and Thanks for all the Fish (1984); Mostly Harmless (1992) and many more. He sold over 15 million books in the UK, the US and Australia. Douglas died unexpectedly in May 2001 at the age of 49. Mark Carwardine (Author) Zoologist MARK CARWARDINE is an active and outspoken conservationist, award-winning writer, TV- and radio - presenter, widely published photographer, magazine columnist and consultant. He presented the weekly programme Nature on BBC Radio 4 for many years and is co-presenter, with Stephen Fry, of the BBC-TV series Last Chance to See. The author of more than 50 books, including several bestsellers, he has been Chairman of prestigious Wildlife Photographer of the Year Competition since 2005.