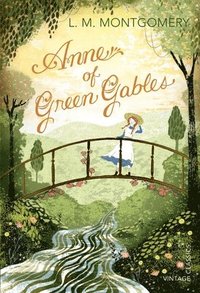 av L M Montgomery
Häftad Engelska, 2013-06-06
73
Köp
Spara som favorit
Finns även som
Visa alla 9 format & utgåvor
'It's a million times nicer to be Anne of Green Gables than Anne of nowhere in particular, isn't it?' My dislikes: Being an orphan, having red hair, being called 'carrots' by Gilbert Blythe. My likes: Living at the Green Gables with Marilla and Matthew, my bosom-friend Diana, dresses with puff sleeves. My regrets: Dying my hair green. Smashing a slate over Gilbert Blythe's head. My dream: To tame my temper. To be good (this is an uphill struggle). To grow up to have auburn hair! Includes exclusive material: In the Backstory you can find out about the real Green Gables, the plucky author and more! Vintage Children's Classics is a twenty-first century classics list aimed at 8-12 year olds and the adults in their lives. Discover timeless favourites from Peter Pan and Alice's Adventures in Wonderland to modern classics such as The Boy in the Striped Pyjamas and The Curious Incident of the Dog in the Night-Time.
Visa hela texten

A super cute story about kindred spirits and one of the ultimate examples of true friendship. * Sugarscape * Within months of the book's publication Anne became a classic heroine for any little girl who has ever fretted about her looks, hungered for Art and Beauty, and pursued long words in the hope they would become her special friends * Guardian * A scrawny 13-year-old, all carrot-colored pigtails and outrageous chatter, Anne seems fated to go nowhere but back to the orphanage. Her new family, after all, ordered a boy and she was delivered by mistake. But by turning adversity to advantage with lots of spunk, Anne of Green Gables has enchanted four generations of children and their elders since the world's most widely read Canadian novel was first published in Boston in 1908 * New York Times * Montgomery's ability to incorporate such complex themes into writing that is so accessible to younger readers makes her arguably the grandmother of the YA/adult crossover novel * Guardian * Anne is a captivating heroine, a whirlwind of energy and good intentions * New Statesman *

L. M. Montgomery, known as Maud, was born on Prince Edward Island, off the coast of Canada, in 1874. Maud's mother died when she was just a baby and so she had a rather unhappy childhood growing up in the care of her strict grandparents. She was just sixteen when she had her first poem published. As a young woman she worked as a teacher and although she didn't enjoy it much it gave her lots of time to write. Maud wrote hundred of short stories, poems and novels throughout her life but it was the hugely popular Anne of Green Gables and its sequels that made her famous. She died in 1942.