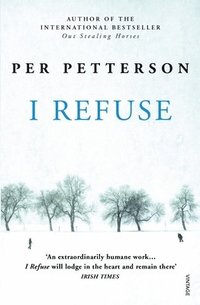 av Per Petterson
Häftad Engelska, 2015-10-22
129
Köp
Spara som favorit
Skickas inom 5-8 vardagar.
Gratis frakt inom Sverige över 159 kr för privatpersoner.
Finns även som
Visa alla 1 format & utgåvor
From the author of the international bestseller Out Stealing Horses I refuse to compromise. I refuse to forgive. I refuse to forget. Tommy's mother has gone. She walked out into the snow one night, leaving him and his sisters with their violent father. Without his best friend Jim, Tommy would be in trouble. But Jim has challenges of his own which will disrupt their precious friendship. A TLS and Guardian Book of the Year
Visa hela texten

Per Petterson was born in Oslo in 1952 and worked for several years as an unskilled labourer and a bookseller. He has received the prestigious Nordic Council Literature Prize and, on multiple occasions, the Brage Prize, the Norwegian Critics Prize for Literature and the Booksellers' Best Book of the Year Award for his many celebrated novels, such as In the Wake, I Curse the River of Time and I Refuse. Petterson made his literary breakthrough in 2003 with Out Stealing Horses, which in English translation won the International IMPAC Dublin Literary Award and the Independent Foreign Fiction Prize. It has been published in fifty languages and was an international bestseller.