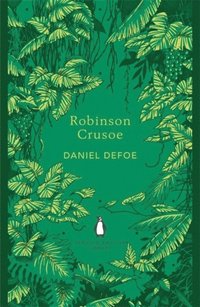 av Daniel Defoe
(1 röst)  |  Läs 1 recension
Häftad Engelska, 2012-12-06
84
Köp
Spara som favorit
Kan tyvärr inte levereras innan julafton.
Finns även som
Visa alla 9 format & utgåvor
The Penguin English Library Edition of Robinson Crusoe by Daniel Defoe 'I walk'd about on the shore, lifting up my hands, and my whole being, as I may say, wrapt up in the contemplation of my deliverance ... reflecting upon all my comrades that were drown'd, and that there should not be one soul sav'd but my self ... ' Who has not dreamed of life on an exotic isle, far away from civilization? Here is the novel which has inspired countless imitations by lesser writers, none of which equal the power and originality of Defoe's famous book. Robinson Crusoe, set ashore on an island after a terrible storm at sea, is forced to make do with only a knife, some tobacco, and a pipe. He learns how to build a canoe, make bread, and endure endless solitude. That is, until, twenty-four years later, when he confronts another human being. First published in 1719, Robinson Crusoe has been praised by such writers as James Joyce, Virginia Woolf, and Samuel Johnson as one of the greatest novels in the English language. The Penguin English Library - 100 editions of the best fiction in English, from the eighteenth century and the very first novels to the beginning of the First World War.
Visa hela texten

Born in London to a prosperous tallow-chandler, Daniel Defoe (1660-1731) was educated at the Presbyterian Ministry at Morton's Academy for Dissenters, but in 1683 abandoned the ministry and followed his father by pursuing a career in trade and politics. He went on to become a well-established and widely-travelled hosiery merchant, as well as a writer of political pamphlets in support of King William III, for whom he also served as a secret agent. A prolific non-fiction writer (writing some 500 books on a wide range of topics), prominent public figure (single-handedly producing the Review, a pro-government newspaper, for some time) and political agitant (arrested in 1703 for writing an ironical satire on High Church extremism), it was not until late in his life that Defoe turned to fiction. He published Robinson Crusoe in 1719, just over ten years before his death, and is widely held to be the first true novelist.