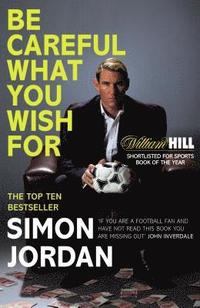 Be Careful What You Wish For

av Simon Jordan
Häftad Engelska, 2013-05-09
169
Köp
Spara som favorit
Finns även som
Visa alla 1 format & utgåvor
Read this explosive insight into the previously unseen world of football club ownership by one of the game's most-recognisable figures. Multimillionaire at 32 Youngest Premier League football club owner at 36 His club and a fortune lost at 42 Owning your childhood club - that's the dream, isn't it? Simon Jordan made his fortune building a mobile phone company from scratch. When he sold it for GBP75 million, he bought Crystal Palace FC, the club he'd supported as a boy, and led them into the Premier League. Ten years later Palace was in administration and Jordan had lost nigh on everything. Be Careful What You Wish For lifts the lid on being the owner of a football club and how the game really works. Hopes and dreams sit alongside greed, self-interest, dodgy transfers, boardroom fights and dressing room dressing downs. Throughout no one is spared, least of all Jordan himself. **A finalist for the William Hill Sports Book of the Year** **Shortlisted for the British Sports Book Award for best autobiography*
Visa hela texten

If you are a football fan and have not read this book, you are missing out -- John Inverdale We all love the idea of owning our boyhood club but [Jordan's] memoir strips away the romance in a frequently hilarious, often alarming account * The Times * No punches pulled * Independent * A frank and brutal insight into why football and business don't mix -- Theo Paphitis I couldn't help laughing... He can't half tell a story * Evening Standard *

Simon Jordan is a serial entrepreneur who made his fortune in the mobile phone industry. He started the Pocket Phone Shop in 1994 expanding it to over 200 outlets by the time of its sale in 2000. In the same year he bought Crystal Palace Football Club, becoming the youngest ever owner of a Football League club. During his ten years in football covering the entire decade of the noughties he became one of the game's most recognisable faces. He is the author of a critically acclaimed series of columns in the Observer, the founder and former owner of the car magazine, Octane, former owner of an award-winning restaurant and bar, and star of a major ITV series, Fortune Millionaire Giveaway. In 2008 he produced and solely funded the critically-lauded British film, Telstar, the story of the legendary record producer and songwriter, Joe Meek, starring Kevin Spacey.