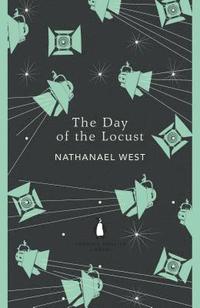 The Day of the Locust

av Nathanael West
Häftad Engelska, 2018-06-07
99
Köp
Spara som favorit
Finns även som
Visa alla 3 format & utgåvor
'He began to wonder if he himself didn't suffer from the ingrained, morbid apathy he liked to draw in others' Tod Hackett is a brilliant young artist - and a man in danger of losing his heart. Brought to an LA studio as a set-designer, he is soon caught up in a fantasy world where the cult of celebrity rules. But when he becomes besotted by the beautiful Faye, an aspiring actress and occasional call-girl, his dream rapidly becomes a nightmare. For, with little in the way of looks and no money to buy her time, Tod's desperate passion can only lead to frustration, disillusionment and rage ... The Penguin English Library - collectable general readers' editions of the best fiction in English, from the eighteenth century to the end of the Second World War.
Visa hela texten

Nathanael West was born in 1903. From 1924-1931 he lived in Paris where he wrote The Dream Life of Balso Snell. On his return to New York he became associate editor of the magazine Contact alongside William Carlos Williams. Towards the end of his life he worked on film scripts in Hollywood. He and his wife were tragically killed in a car accident in 1940.