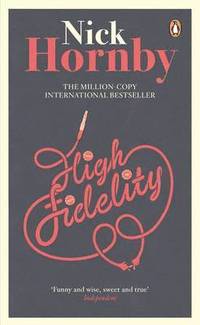 av Nick Hornby
Häftad Engelska, 2014-01-02
97
Köp
Spara som favorit
Finns i lager! Skickas inom 1-2 vardagar.
Gratis frakt inom Sverige över 159 kr för privatpersoner.
Finns även som
Visa alla 5 format & utgåvor
THE MILLION-COPY INTERNATIONAL BESTSELLER & SOURCE OF THE 2020 HULU SERIES 'One of my favourite novels' Zoe Kravitz in Vulture ________________ Do you know your desert-island, all-time, top five most memorable break-ups? Rob does. But Laura isn't on it - even though she's just become his latest ex. Finding he can't get over Laura, record-store owner Rob decides to revisit his relationship top hits to figure out what went wrong. But soon, he's asking himself some big questions: about relationships, about life and about his own self-destructive tendencies. Astutely observed and wickedly funny, Nick Hornby's cult classic explores love, loss and the need for a good playlist. A must for readers of David Nicholls and music geeks everywhere! ________________ 'A triumphant first novel. True to life, very funny and moving' Financial Times 'Extremely cleverly observed' Mail on Sunday 'If this book was a record, we would be calling it an instant classic. Because that's what it is' Guardian 'Leaves you believing not only in the redemptive power of music but above all the redemptive power of love. Funny and wise, sweet and true' Independent
Visa hela texten

Fast, fun, and remarkably deft: a sharp-edged portrait that manages at once to be vicious, generous, and utterly good-natured * Kirkus Reviews *

Nick Hornby is the bestselling author of eight novels, including High Fidelity, About a Boy and, most recently, Just Like You. He has also published several works of non-fiction including his ground-breaking debut, Fever Pitch, and has written numerous award-winning screenplays for film and television including Brooklyn, Wild and State of the Union.