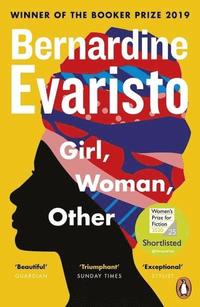 WINNER OF THE BOOKER PRIZE 2019

av Bernardine Evaristo
(8 röster)  |  Läs 1 recension
Häftad Engelska, 2020-03-05
123
Köp
Spara som favorit
Finns även som
Visa alla 2 format & utgåvor
THE SUNDAY TIMES 1# BESTSELLER & BOOKER PRIZE WINNER BRITISH BOOK AWARDS AUTHOR & FICTION BOOK OF THE YEAR 2020 'The most absorbing book I read all year.' Roxane Gay ____________________________ This is Britain as you've never read it. This is Britain as it has never been told. From Newcastle to Cornwall, from the birth of the twentieth century to the teens of the twenty-first, Girl, Woman, Other follows a cast of twelve characters on their personal journeys through this country and the last hundred years. They're each looking for something - a shared past, an unexpected future, a place to call home, somewhere to fit in, a lover, a missed mother, a lost father, even just a touch of hope . . . ____________________________ '[Bernardine Evaristo] is one of the very best that we have' Nikesh Shukla on Twitter 'A choral love song to black womanhood in modern Great Britain' Elle 'Beautifully interwoven stories of identity, race, womanhood, and the realities of modern Britain. The characters are so vivid, the writing is beautiful and it brims with humanity' Nicola Sturgeon on Twitter 'Bernardine Evaristo can take any story from any time and turn it into something vibrating with life' Ali Smith, author of How to be both 'Exceptional. You have to order it right now' Stylist 'Sparkling, inventive' Sunday Times
Visa hela texten

Give [Evaristo] more prizes! All the prizes! It has the pace of a whistle stop tour and yet it seems no detail of the myriad of lives we encounter is missed. -- Graham Norton via Twitter If you haven't discovered [Evaristo] yet, I urge you to read all and any of her books. Devoured one a day already and ordered more. Hilarious, compassionate, moving and brutally honest. -- Richard E Grant via Twitter Beautifully interwoven stories of identity, race, womanhood, and the realities of modern Britain. The characters are so vivid, the writing is beautiful and it brims with humanity. -- Nicola Sturgeon via Twitter Weaves through time and space with crackling originality * Vogue * Exuberant, bursting at the seams in delightful ways... Evaristo continues to expand and enhance our literary canon. If you want to understand modern day Britain, this is the writer to read * New Statesman * An exceptional book that unites poetry, social history, women's voices and beyond. Order it right now * Stylist * Evaristo's prose hums with life as characters seem to step off the page fully formed. At turns funny and sad, tender and true, this book deserves to win awards * Red * Brims with vitality * FT * With this rich composition, Evaristo deserves a toast * Literary Review * Masterful... A choral love song to black womanhood in modern Great Britain * Elle * 'Girl, Woman, Other is about struggle, but it is also about love, joy and imagination. * Guardian * Threads together the diverse life stories of 12 black British women in ways that deliberately resist categorisation * Metro * Such a satisfying read, funny and true, the characters are so real you feel you know them already -- Miranda Sawyer via Twitter A warm, humorous and ambitious novel, and one that is enjoyably playful in style. It is both a product of its time and unlike any book ever written about Britain * Economist * My favorite book of 2019 . . . the most absorbing book I read all year. This novel is a master class in storytelling. It is absolutely unforgettable. When I turned the final page, I felt the ache of having to leave the world Evaristo created but I also felt the excitement of getting to read the book all over again. It should have won the Booker alone. It deserves all the awards and then some. -- Roxanne Gay 'Girl, Woman, Other by Bernardine Evaristo is the best book in recent years to have embodied the idea that there are as many ways to be joyful as there are to be Black. Polyphonic and nuanced, it celebrates the lives of Black British women rather than commiserating with them, which is a crucial - and rare - distinction.' * Sara Collins *

Bernardine Evaristo, MBE, is the award-winning author of eight books of fiction and verse fiction that explore aspects of the African diaspora. Her novel Girl, Woman, Other made her the first black woman to win the Booker Prize in 2019, as well winning the Fiction Book of the Year Award at the British Book Awards in 2020, where she also won Author of the Year, and the Indie Book Award. She also became the first woman of colour and black British writer to reach No.1 in the UK paperback fiction chart in 2020. Her writing spans reviews, essays, drama and radio, and she has edited and guest-edited national publications, including The Sunday Time's Style magazine. Her other awards and honours include an MBE in 2009. Bernardine is Professor of Creative Writing at Brunel University, London, and President of the Royal Society of Literature. She lives in London with her husband. www.bevaristo.com