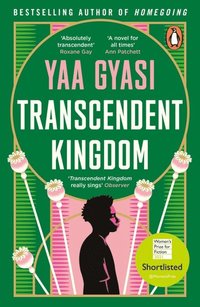 Shortlisted for the Women's Prize for Fiction 2021

av Yaa Gyasi
Häftad Engelska, 2022-03-31
119
Köp
Spara som favorit
Finns även som
Visa alla 3 format & utgåvor
SHORTLISTED FOR THE WOMEN'S PRIZE FOR FICTION 2021 **From the bestselling author of Homegoing** ______________________________________________ As a child Gifty would ask her parents to tell the story of their journey from Ghana to Alabama, seeking escape in myths of heroism and romance. When her father and brother succumb to the hard reality of immigrant life in the American South, their family of four becomes two - and the life Gifty dreamed of slips away. Years later, desperate to understand the opioid addiction that destroyed her brother's life, she turns to science for answers. But when her mother comes to stay, Gifty soon learns that the roots of their tangled traumas reach farther than she ever thought. Tracing her family's story through continents and generations will take her deep into the dark heart of modern America. Transcendent Kingdom is a searing story of love, loss and redemption, and the myriad ways we try to rebuild our lives from the rubble of our collective pasts. ______________________________________________________ 'Absolutely transcendent. A gorgeously woven narrative . . . not a word or idea out of place' Roxane Gay 'A piercing story of faith, science and the opioid crisis . . . There's bravery as well as beauty here' Observer
Visa hela texten

A brilliant novel, with not a word out of place -- Caleb Azumah Nelson * Guardian, Best Books of 2021 * A piercing story of faith, science and the opioid crisis . . . Transcendent Kingdom really sings. There's bravery as well as beauty here * Observer * Transcendent Kingdom is a novel for all times Absolutely transcendent. A gorgeously woven narrative . . . not a word or idea out of place. I am quite angry this is so good * Roxane Gay * Transcendent Kingdom is a quietly magnificent novel - vivid, touching and beautifully written, and also unafraid to be, and to remain, really very sad. * i * Her equally outstanding second novel, Transcendent Kingdom, smaller in scale, is another graceful exploration of trauma reverberating through a family...introspective and intimate * Sunday Telegraph * This novel is an unflinching account of loss, but it is also a moving tribute to the ability of the human spirit to endure such tragedies * The Times * Gyasi's novel is a thoughtful analysis of a pressing social problem * Mail on Sunday * Among other things [Transcendent Kingdom] is a sharp reckoning with the tensions between race, science and religion...its scope is pared back, its register intimate - not many writers can switch style like this * Sunday Times Culture * A powerful portrayal of love and faith that reminds us how our parents' actions can ripple through generations * Telegraph * [A] mightily enjoyable novel * Daily Mail * Perhaps neither science nor religion alone could capture transcendence, but Gyasi has proved, once again, that a novel can * Guardian * A book of blazing brilliance . . . A double helix of wisdom and rage twists through the quiet lines of this novel. Yaa Gyasi is one of the most enlightening novelists writing today * Washington Post * A compelling look at a woman's struggle to move on from the devastating effects of her family falling apart in front of her eyes * Stylist * The must-read book of the year so far * Elle * A powerful, wholly unsentimental novel about family love, loss, belonging and belief that is more focused but just as daring as its predecessor, and to my mind even more successful * Wall Street Journal * Gyasi's second novel, Transcendent Kingdom, is a very different book, and, I think, a better one - contemporary, personal, acutely focused on a single family, and intensely felt * New Yorker * Exquisitely written with a lightness of touch despite its difficult themes; this novel is a triumph * Red * Raw, powerful storytelling that tackles race, religion, addiction and grief in a thoughtful way * Good Housekeeping * With deft agility and undeniable artistry, Gyasi's latest is an eloquent examination of resilient survival * Booklist * The Ghanaian-American has become a firm literary favour...Transcendent Kingdom is sure to cement her spot further * Stylist * Meticulous, psychologically complex ... At once a vivid evocation of the immigrant experience and a sharp delineation of an individual's inner struggle, the novel brilliantly succeeds on both counts * Publishers Weekly, starred review * Transcendent Kingdom is quiet in the way a wise soul will sit in the corner, clear their throat and when they speak, everyone listens...Transcendent Kingdom is a book always asking this question: how did we get here? * Bad Form Review * The range Gyasi displays in just two books is staggering * USA Today * Remarkable, a devastating account of America . . . explores horror without ever losing sight of humanity or hope * Sunday Times on 'Homegoing' * A stirringly gifted writer. It's impossible not to admire the ambition and scope of Homegoing * New York Times * If you want to know why the world is this way, try this book for starters * Naomi Alderman, author of The Power * I need a book like this to remember what is possible Beautifully written . . . a raw look at the personal destruction caused by the opioid crisis * Scotsman * A poignant story of family love, loss and ambition * Radio Times * Yaa Gyasi's writin

Yaa Gyasi was born in Mampong, Ghana, and raised in Huntsville, Alabama. Her first novel, Homegoing, was a Sunday Times bestseller, won the National Book Critics Circle Award for Best First Novel and was shortlisted for the PEN/Robert W. Bingham Prize for Debut Fiction. In 2017 Yaa Gyasi was selected as one of Granta's Best of Young American Novelists and in 2019 the BBC selected her debut as one of the 100 Novels that Shaped Our World. Her second book, Transcendent Kingdom, was shortlisted for the Women's Prize for Fiction and is a New York Times bestseller.