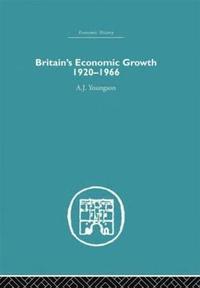 av A J Youngson
Inbunden Engelska, 2005-11-01
2299
Köp
Spara som favorit
Skickas inom 10-15 vardagar.
Gratis frakt inom Sverige över 159 kr för privatpersoner.
Finns även som
Visa alla 3 format & utgåvor
Professor Youngson's book is an ubiased review of Britain's past experience and present difficulties. Few sacred cows are spared. There is no pretence that fundamental problems were resolved at the time of its first publication in 1967. Many econmic historians fail in their assessment of Britian's economic prospects as there is a tendency to look only at recent events to explain current problems. Youngson saw that this was short sighted. An economy, like an airliner, cannot suddenly change its course; it is subject to persistent forces and tendencies; it is powerfully affected by what has happened in the recent and sometimes in the not so recent past. Therefore to understand the problems of today we must know somthing of how persistent they are , and about what solutions have already been tried. This book provides a thorough examination of Britain's economic growth from 1920-1966 and contextualises Britain's situation within its true historical perspective. This book was first published in 1967.
Visa hela texten

1. World economic development since 1920 Continued economic progress by industrialized countries of Europe and North America; more rapid spread than before of modern techniques of organization and production into other countries; Alteration in the general trends of world trade; Unprecedented growth of population 2. The Nineteen-Twenties The struggle for the gold standard; Old and new industries; exports, foreign investment and the balance of payments; The extension of government activity; Wages, trade unions and industrial relations. 3. The Economic Crisis, 1929-32 4. The Nineteen-Thirties Cheap money and the price level; Old and new industries; Agriculture; Exports, foreign investment and teh balance of payments; Unemployment and government policy; The standard of living 5. The War Economy, 1939-45 6. Since the War, 1945-66 Government Planning, monetary policy and the balance of payments; Industrial development and foreign trage; Social policy, wages and trade unions; Comment and analysis. Appendix: Economic Thought and Policy Between the Wars