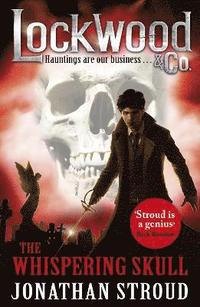 av Jonathan Stroud
Häftad Engelska, 2015-02-26
110
Köp
Spara som favorit
Finns även som
Visa alla 2 format & utgåvor
Soon to be a major Netflix series! Ghosts and ghouls beware! London's smallest, shabbiest and most talented psychic detection agency is back. Life is never exactly peaceful for Lockwood & Co. Lucy and George are trying to solve the mystery of the talking skull trapped in their ghost jar, while Lockwood is desperate for an exciting new case. Things seem to be looking up when the team is called to Kensal Green Cemetery to investigate the grave of a sinister Victorian doctor. Strange apparitions have been seen there, and the site must be made safe. As usual, Lockwood is confident; as usual, everything goes wrong - a terrible phantom is freed and a dangerous object is stolen from the coffin. Lockwood & Co. must recover the relic before its power is unleashed, but it's a race against time. Their obnoxious rivals from the Fittes agency are also on the hunt. And if that's not bad enough, the skull in the ghost-jar is stirring again... The author of the blockbuster BARTIMAEUS sequence delivers another humorous and chilling instalment in the critically acclaimed LOCKWOOD & CO. series. 'Stroud is a genius' Rick Riordan, author of the Percy Jackson series.
Visa hela texten

The second volume in Jonathan Stroud's exceptional series . . . Stroud's writing is inventive and funny, but be warned: this is packed with grisly ghouls and is not perhaps for the faint-hearted. -- Lorna Bradbury * Sunday Telegraph * Seriously scary, brilliant prose. * Metro * Plenty of humour alongside the chills. * Financial Times * I've waited with baited breath for the second instalment of Jonathan Stroud's Lockwood & Co novels. At last, The Whispering Skull is here and it is definitely worth the wait. * Scotsman Teen review * Stroud delivers another riveting narrative * Booklist *

Jonathan Stroud was born in Bedford in 1970. After studying English Literature at York University, he moved to London, where he worked as an editor in a publishing firm. He is also the author of the best-selling BARTIMAEUS sequence, which is published in 35 languages and has sold 6 million copies worldwide, and also of four other novels: HEROES OF THE VALLEY, THE LAST SIEGE, THE LEAP and BURIED FIRE. He lives in Hertfordshire with his family. He has yet to see a ghost, but is keeping his eyes open.