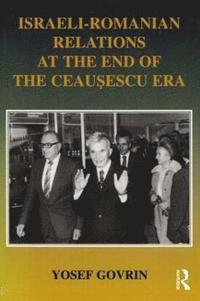 Israeli-Romanian Relations at the End of the Ceausescu Era

Dr Yosef Govrin joined Israel's Ministry of Foreign Affairs in 1953. Between 1955 and 1970, his role as a diplomat took him to Sydney, Moscow and Buenos Aires. From 1976 to 1985, he was Director of the Ministry's East European Department, after which he was appointed Israel's Ambassador to Romania, Director General to the Ministry, and Ambassador to Slovakia, Slovenia and to the UNO in Vienna. He is the author of several publications and was awarded Israel's Prime Minister's Prize for Israeli-Soviet Relation 1953-1967 in 1991.

Yosef Govrins book is very beneficial for anyone interested in Romanian-Israel relations and will serve as the basis for further studies of this type." - Nativ