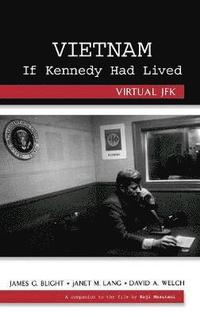 Vietnam If Kennedy Had Lived

av James G Blight, Janet M Lang, David A Welch
Inbunden Engelska, 2009-02-16
619
Köp
Spara som favorit
Skickas inom 10-15 vardagar.
Fri frakt inom Sverige för privatpersoner.
Finns även som
Visa alla 1 format & utgåvor
The Virtual JFK DVD is now available! For more information on the film companion to the book, visit http://www.virtualjfk.com/ It Matters Who Is President-Then and Now At the heart of this provocative book lies the fundamental question: Does it matter who is president on issues of war and peace? The Vietnam War was one of the most catastrophic and bloody in living memory, and its lessons take on resonance in light of America's current devastating involvement in Iraq. Tackling head-on the most controversial and debated "what if" in U.S. foreign policy, this unique work explores what President John F. Kennedy would have done in Vietnam if he had not been assassinated in 1963. Drawing on a wealth of recently declassified documents, frank oral testimony of White House officials from both the Kennedy and Johnson administrations, and the analysis of top historians, this book presents compelling evidence that JFK was ready to end U.S. involvement well before the conflict escalated. With vivid immediacy, readers will feel they are in the president's war room as the debates raged that forever changed the course of American history-and continue to affect us profoundly today as the shadows of Vietnam stretch into Iraq.
Visa hela texten

Informative and at times exhilarating; recommended for academic collections. * Library Journal * John F. Kennedy's unrealized Vietnam strategy gets a comprehensive workout in this volume. . . . The book offers other new insights (PBS broadcaster and former LBJ advisor Bill Moyers, a possible Kennedy-McNamara 'back-channel'). * Publishers Weekly * The authors . . . make a fair case that . . . 'virtual history' is a much more serious exercise than counterfactual history. . . . The liveliness of the exchanges and the enthusiasm of the participants do illuminate this critical period in U.S. history. * Foreign Affairs * On the two most treacherous issues Kennedy left unresolved, the jury will always be out. Mindful of the southern segregationists in his own party, he moved timidly in advancing civil rights for African-Americans. We'll never know whether his powerful Oval Office addresses, promoted by the National Guard-enforced admission of black students into the University of Alabama in June 1963, was the harbinger of a greater commitment to civil rights activism or not. Nor, of course, will we ever know whether Kennedy would have followed Johnson's disastrous course in Vietnam. The closest we have to an answer can be found in Virtual JFK: Vietnam If Kennedy Had Lived. * The New York Review Of Books * A fascinating and important book that uses innovative research to explain how America got into the Vietnam quagmire. It is deeply relevant to today's debates about the wars in Iraq and Afghanistan and the danger of war with Iran with timely lessons on presidential leadership. -- Bruce Riedel, Director of the Intelligence Project at the Brookings Institution As an exercise in virtual history, this book is impeccable. The authors have brought together the relevant policy makers, scholars, and newly released documents to examine the major question of the Vietnam War. Their conclusion-that Kennedy would not have Americanized the war-is reasonable and significant, as is their methodology. This is must reading for any student of American foreign relations. -- Robert K. Brigham, Vassar College; author of Guerrilla Diplomacy The authors deftly analyze all sides in the debate. They also draw lessons from the Kennedy presidency that can now be useful as the nation moves to rescue U.S. foreign policy from the morass into which it has fallen during the presidency of George W. Bush. JFK has never looked more persuasive or more relevant than he does here. -- Wayne S. Smith, senior fellow at the Center for International Policy and adjunct professor at Johns Hopkins University, former chief of the U.S. Interests Section in Havana (1979-1982) I urge everyone interested in Kennedy, Johnson, and Vietnam, and everyone concerned about the kind of leadership we need to keep our nation out of war, to read this book. It is far and away the best book on these subjects I have ever read-lucid, rich, and balanced, with all sides getting a fair, but critical, hearing. -- Robert S. McNamara, Secretary of Defense under Presidents John F. Kennedy and Lyndon B. Johnson (1960-1968) In this carefully documented but very readable account, Blight, Lang, and Welch provide a ringside seat on an important debate that is more than a historical curiosity. They show how a change of leaders can make a profound difference in the unfolding of historical events-then and now. Anyone interested in America's role in the world should read this absorbing book. -- Joseph S. Nye Jr., University Distinguished Service Professor, Harvard University

Prologue: Whither Vietnam, If Kennedy Had Lived? Chapter 1: Why Kennedy, Johnson, and Vietnam? Why Now? Chapter 2: Who's Who at the Musgrove Conference Chapter 3: What JFK Decided: November 1961 Chapter 4: What JFK Decided: October-November 1963 Chapter 5: What LBJ Decided: The "Long 1964" Chapter 6: Virtual JFK, Not Counterfactual JFK: Vietnam If Kennedy Had Lived Epilogue: Does it Matter Who Is President in Matters of War and Peace?: A Tale of Three Choices Appendix A: Excerpts From Declassified Documents and Secret Audio Tapes Appendix B: JFK What If Questionnaire for Musgrove Participants