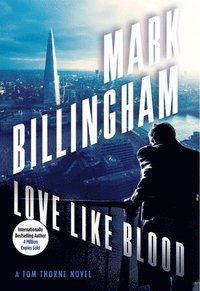 av Mark Billingham
Häftad Engelska, 2018-06-19
189
Köp
Spara som favorit
When a murder strikes near to the heart for DI Nicola Tanner, she enlists Tom Thorne's help in the latest thriller from "one of the best crime novelists working today" (Laura Lippman). Internationally bestselling author Mark Billingham's riveting new novel Love Like Blood marks the return of series character Tom Thorne, "the next superstar detective" (Lee Child), as he pairs up with perfectionist detective inspector Nicola Tanner of Die of Shame on an investigation that ventures into politically sensitive territory. DI Nicola Tanner needs Tom Thorne's help. Her partner, Susan, has been brutally murdered and Tanner is convinced that it was a case of mistaken identity that she was the real target. The murderer's motive might have something to do with Tanner's recent work on a string of cold-case honor killings she believes to be related. Tanner is now on compassionate leave but insists on pursuing the case off the books and knows Thorne is just the man to jump into the fire with her. He agrees but quickly finds that working in such controversial territory is dangerous in more ways than one. And when a young couple goes missing, they have a chance to investigate a case that is anything but cold. Racing towards a twist-filled ending, Love Like Blood is another feat of masterful plotting from one of Britain's top crime novelists.
Visa hela texten

Praise for Love Like Blood #5 Sunday Times bestseller in the UK "A novel that probes the phenomenon of honor killings and casts doubt on the work of the Metropolitan Police's Honor Crimes Unit."--New York Times Book Review, Editors' Choice "Brilliant."--Independent (UK) "Honor-based violence is a scourge in Britain, where the Crown Prosecution Service estimates that the 12 or so honor killings reported each year are only a fraction of the true number committed . . . In Love Like Blood, Mark Billingham puts human faces on one such case . . . Although 'dishonored' male relatives are prime suspects in most cases of punitive violence, squeamish families often prefer to shop the job to a middleman with access to professional hit men'thugs like Muldoon and Riaz, who collaborate efficiently but whose cultural clashes can be morbidly funny."--Marilyn Stasio, New York Times Book Review --Love Like Blood moves quickly and skillfully with reliably readable prose . . . In each chapter, Billingham adeptly unspools a new thread, a new twist, which pushes the reader onward into the story, as he deftly manages an expansive plot without slowing down the momentum of the characters or the story."--Mystery Scene --Love Like Blood hums along on all six cylinders. Billingham has always been a smart writer, one who delves into the nooks and crannies of the police procedural genre where others don't think of going, and once again he takes the genre to new heights here with its clever murder hypothesis that is as current as today's headlines . . . Billingham doesn't get near the recognition in the United States that he has earned and deserves. Hopefully Love Like Blood will change that."--Joe Hartlaub, Bookreporter "Gripping . . . A mighty fine police procedural, and it's a pleasure, as always, to watch Tom sift through clues and intentional misdirection along the journey to find his perps. And in keeping with the time-honored tradition, there is a final-chapter surprise to keep you on your toes."--Bruce Tierney, BookPage --Billingham does justice to a subject that could be handled badly during an era of rampant Islamophobia, never climbing on a soap box but treating the topic with the shades of complexity and ethical clarity it deserves. He has traded the theatrical serial-killer-with-a-difference plotlines of the first entries in this series for a more thoughtful if less frantically paced engagement with violence and its social vectors. But he keeps a few surprises up his sleeve."--Barbara Fister, Reviewing the Evidence "Shocking and topical . . . Billingham has few equals in moulding convincing characters and his finest creation Thorne is in top form . . . An engaging thriller from one of Britain's best crime writers."--Daily Express (UK) "Billingham's ground-breaking novel Love Like Blood . . . confronts the phenomenon of 'honour'-based killings . . . A gripping, unsensational take on a type of crime that is happening more frequently than many of us realise."--Sunday Times (UK) "Mark Billingham's . . . crime novels don't shy away from being pitch-black as well as witty. Love Like Blood features the welcome return of Billingham's astute and empathetic London-based detective Tom Thorne."--Daneet Steffens, Seattle Review of Books "Billingham's skillful plotting is everywhere in evidence here, and Thorne remains a compelling character, comparable to Connelly's Bosch and Rankin's Rebus."--Booklist "Irascible, irritating and indefatigable, DI Tom Thorne has earned his place in the pantheon of fine fictional policemen, alongside those legendary inspectors Morse and Rebus . . . Billingham's passionate depiction of the injustice and brutality that flow from these killings spills from every page, making this one of his most powerful crime novels, written with a fury that does both him and Thorne justice."--Daily Mail (UK) "This se

Mark Billingham has twice won the Theakston Old Peculier Award for Best Crime Novel and also won the Sherlock Award for "Best Detective Created by a British Author." His books, which include the critically acclaimed Tom Thorne series, have been translated into twenty-five languages and have sold over five million copies. He lives in London.