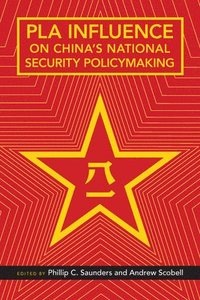 av Phillip C Saunders, Andrew Scobell
Häftad Engelska, 2015-09-09
269
Köp
Spara som favorit
Kan levereras innan julafton!
Finns även som
Visa alla 2 format & utgåvor
In recent years there have been reports of actions purportedly taken by People's Liberation Army (PLA) units without civilian authorization, and of Chinese Communist Party (CCP) civilian leaders seeking to curry favor with the military-suggesting that a nationalistic and increasingly influential PLA is driving more assertive Chinese policies on a range of military and sovereignty issues. To many experienced PLA watchers, however, the PLA remains a "party-army" that is responsive to orders from the CCP. PLA Influence on China's National Security Policymaking seeks to assess the "real" relationship between the PLA and its civilian masters by moving beyond media and pundit speculation to mount an in-depth examination and explanation of the PLA's role in national security policymaking. After examining the structural factors that shape PLA interactions with the Party-State, the book uses case studies to explore the PLA's role in foreign policy crises. It then assesses the PLA's role in China's territorial disputes and in military interactions with civilian government and business, exploring the military's role in China's civil-military integration development strategy. The evidence reveals that today's PLA does appear to have more influence on purely military issues than in the past-but much less influence on political issues-and to be more actively engaged in policy debates on mixed civil-military issues where military equities are at stake.
Visa hela texten

"The role of the Chinese military in decision-making is one of the most puzzling, yet most important, questions facing those who try to assess the threat that a rising China may pose to peace in Asia. In the face of alarmist myths and speculations, this book offers the seasoned insights of our best specialists into the distinctive Chinese model of civil-military relations." -- Andrew J. Nathan, Class of 1919 Professor of Political Science * Columbia University * "Bringing together the field's leading scholars under a single cover, PLA Influence on China's National Security Policymaking is a signal contribution to understanding PLA sway over China's national security policies and crisis management behavior. Describing the pathways by which PLA influence is exerted, this volume is the new field standard." -- David M. Lampton, Hyman Professor and Director of China Studies * Johns Hopkins-SAIS * "Few issues concerning China are as important yet vexing as the roles of the military. This unique volume, by the leading specialists in the world, offers in-depth and nuanced analyses of both inputs and outputs of the PLA in shaping China's national security posture. Empirically rich and analytically insightful, this is the best assessment of the Chinese military to appear in many years." -- David Shambaugh * George Washington University and the Brookings Institution * "China's rapid rise to a great power status and the modernization of its armed forces have raised concerns about the PLA's [People's Liberation Army] gaining influence in China's national strategy, or in an even worse scenario, acting independently of the political leadership. The contributors of this book, however, argue that the PLA has remained subordinate to the country's political leadership. This should shatter foreign misperceptions and provide a better understanding of civil-military relations in China. Thus I highly recommend this volume, as it meets high academic standards and is a valuable addition to the existing knowledge on this topic." -- Ghulam Ali * <i>Journal of Chinese Political Science</i> * "Saunders and Scobell have assembled leading authorities in civil-military relations in China, a subject of great importance for U.S.-Chinese relations and East Asian security....Highly informative." -- Robert Ross * <i>Foreign Affairs</i> *

Phillip C. Saunders is Director of the Center for the Study of Chinese Military Affairs at the National Defense University. Andrew Scobell is a Senior Political Scientist at the RAND Corporation.

Contents and AbstractsIntroduction: PLA Influence on Chinese National Security Policymaking chapter abstractThe Introduction examines four trends that have reshaped civil-military relations in China and affected the role of the People's Liberation Army (PLA) in policymaking. It presents two analytic approaches-one focused on the nature of the issue under consideration, where decisions on that issue are made within the Chinese system, and what role the PLA plays in those decisions, and one focused on the PLA's ability to exert influence at different stages in the policymaking process. After brief chapter summaries, the Introduction presents ten findings, concluding that civilian Communist Party leaders remain in control of the military, but that over the last two decades the PLA appears to have more influence on purely military issues, much less influence on political issues, and to be more actively engaged in policy debates on mixed civil-military issues where military equities are at stake. 1Reconsidering the PLA as an Interest Group chapter abstractIn this chapter Isaac Kardon and Phillip Saunders examine whether the PLA can be thought of as an interest group, finding that factors which previously limited the PLA's ability to act as a coherent policy actor have diminished. Today's PLA demonstrates numerous characteristics of an interest group, including professionalization, growing coherence of its corporate interests, an expanding monopoly on national security expertise and information, and enhanced capacity to articulate and defend institutional goals and equities in order to shape public debate and influence policy. 2The PLA in the Party Leadership Decisionmaking System chapter abstractIn this chapter Alice Miller explains the political logic behind the transformation of the Chinese leadership's decisionmaking system, emphasizing a deliberate effort by Deng Xiaoping in the 1980s to establish an effective collective leadership system with checks and balances to prevent attempts by any individual member-and especially by the party general secretary-to dominate the others. She argues that these reforms have transformed civil-military relations from "subjective civilian control" to "objective civilian control" as the PLA's influence on political decisions has narrowed into institutional mechanisms focused on security issues. These structural changes limit the ability of PLA leaders to exert influence on political issues or to exploit potential splits among top civilian leaders. 3The Riddle in the Middle: China's Central Military Commission in the Twenty-first Century chapter abstractIn this chapter Tai Ming Cheung uses new sources to describe the inner workings of the secretive Central Military Commission (CMC). He identifies key political and organizational principles guiding the CMC's development; describes its current structure, workings, and responsibilities; highlights the critical role played by the CMC vice-chairmen; evaluates Hu Jintao's role as CMC chairman and problems in civil-military relations during his tenure; and conducts an initial assessment of Xi Jinping's early tenure as CMC chairman. Cheung stresses Xi's emphasis on the role of military power in a "strong China dream," efforts to impose stricter political and fiscal discipline, and decision to restructure the military command system to improve its ability to conduct joint operations. 4Top Leaders and the PLA: The Different Styles of Jiang, Hu, and Xi chapter abstractNan Li's chapter assesses how Jiang Zemin and Hu Jintao exerted influence over the PLA, and analyzes why their methods differed. He distinguishes between two approaches: "currying favor" by catering to PLA interests and "imposing will" by forcing the PLA to do things it would not otherwise want to do. He argues that Jiang curried favor early in his leadership and then imposed his will, while Hu curried favor throughout his tenure. Nan L