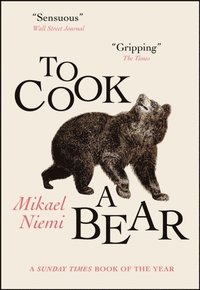 To Cook a Bear

Winner of the Petrona Award 2021

av Mikael Niemi
Häftad Engelska, 2021-06-29
95
Köp
Spara som favorit
Finns även som
Visa alla 2 format & utgåvor
"So much to relish here . . . the plot is gripping, and the writing is just lovely!" DIANE SETTERFIELD, author of Once Upon A River "The year's most memorable narrator . . . An unusual and intriguing crime story" SUNDAY TIMES BOOKS OF THE YEAR "Niemi succeeds in constructing a story that works as a murder mystery and as a compelling study of a dangerously inward-looking community" SUNDAY TIMES "A riveting, psychologically astute mystery . . . It is not to be missed" BOOKLIST "An original and gripping crime story" THE TIMES **NOW SHORTLISTED FOR THE CWA INTERNATIONAL DAGGER** It is 1852, and in Sweden's far north, deep in the Arctic Circle, charismatic preacher and Revivalist Lars Levi Laestadius impassions a poverty-stricken congregation with visions of salvation. But local leaders have reason to resist a shift to temperance over alcohol. Jussi, the young Sami boy Laestadius has rescued from destitution and abuse, becomes the preacher's faithful disciple on long botanical treks to explore the flora and fauna. Laestadius also teaches him to read and write - and to love and fear God. When a milkmaid goes missing deep in the forest, the locals suspect a predatory bear is at large. A second girl is attacked, and the sheriff is quick to offer a reward for the bear's capture. Using early forensics and daguerreotype, Laestadius and Jussi find clues that point to a far worse killer on the loose, even as they are unaware of the evil closing in around them. To Cook a Bear explores how communities turn inwards, how superstition can turn to violence, and how the power of language can be transformative in a richly fascinating mystery. "Superb suspense . . . Simply a great literary experience!" V.G. (Sweden) "A masterpiece of narrative" La Vanguardia (Spain) "A philosophical novel, a crime novel, a historical novel and a coming-of-age story complement one another" La Stampa (Italy) "One is transported into a strange time and a fascinating world that is both beautiful and brutal" Politiken (Denmark) "Formidable delivery . . . Unlike anything else you have read . . . An incredible novel" Adresseavisen Translated from the Swedish by Deborah Bragan-Turner
Visa hela texten

So much to relish here . . . the plot is grippling, there's a beautifully handled thread on reading and writing, and the writing is just lovely! -- Diane Setterfield This book is a masterpiece . . . The legendary Laestadius becomes a kind of Sherlock Holmes in this extraordinary historical crime novel . . . [Niemi] creates images, smells, sounds, atmospheres and characters that make this book a truly extraordinary reading experience. * Dagbladet (Sweden) * Superb suspense! . . . a multifaceted, mysterious and engaging novel . . . To Cook A Bear irresistibly engages the reader and provides a ruthless and almost physically palpable portrayal of a time that seems endlessly long ago . . . simply a great literary experience * V.G. (Sweden) * It's captivating as well as illuminating; several historical figures from the birth of Laestadianism appear, and the murder mysteries keep the reader entranced throughout the almost 400 pages . . . Mikael Niemi has written an intensely entertaining story * Weekendavisen (Sweden) * The pleasure of To Cook a Bear is twofold: On the one hand, one experiences an almost criminal thrill of voyeurism as Jussi and the Pastor investigate the mysterious assaults. On the other hand, one is transported into a strange time and fascinating world that is both beautiful and brutal. The descriptions of the landscape and the changing of the seasons instil an urgent desire to crank up the time machine . . . that is how it feels when you finish To Cook a Bear: as if the world just got a little bit bigger * Politiken (Denmark) * Niemi's writing - that of a narrator and a poet, a dreamer and a storyteller - brushes the highest peaks of the most delicate lyricism, rising strongly out of the abyss of the darkest mystery -- Alessandra Iadicicco * Corriere della Sera (Italy) * Niemi plots a composite story where the philosophical novel, the crime novel, the historical novel and the coming-of-age story coexist, complementing one another instead of getting in each other's way -- Alessia Gazzola * La Stampa (Italy) * A masterpiece of narrative * La Vanguardia (Spain) * Niemi's thriller has such a suggestive atmosphere -stifling in its sweating puritanism, yet somehow lyrical, with an incredibly well conceived plot" laura ricci, Il Sole 24 Ore -- Laura Ricci * Il Sole 24 Ore (Italy) * An original and gripping crime story -- Antonia Senior * The Times * An invented tale of murder, superstition and bigotry . . . Niemi succeeds in constructing a story that works as a murder mystery and as a compelling study of a dangerously inward-looking community. -- Nick Rennison * Sunday Times * "The year's most memorable narrator . . . An unusual and intriguing crime story. * Sunday Times Books of the Year * A riveting, psychologically astute mystery . . . an example of both superb genre fiction and character-driven literary fiction. It is not to be missed. -- Michael Cart * Booklist *

Mikael Niemi was born in 1959 and grew up in Pajala in the northernmost part of Sweden, near the Finnish border, where he still lives. Before the publication of To Cook A Bear, his breakthrough novel was Popular Music From Vittula (2000), selling more than one million copies. It won the Swedish August Prize and has been translated into more than thirty languages. To Cook A Bear has now been sold for translation to fifteen territories.