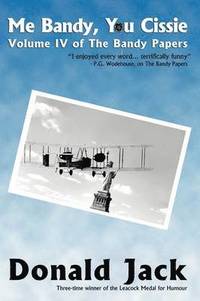 Me Bandy, You Cissie

After not quite succeeding in defeating communism in Russia, he's returning to the New World when he meets shy, awkward Cissie Chaffington, whose first glimmerings of interest in aviation appear when she sends a cooked duck soaring through the ship's first-class dining room.

More than just terminal embarrassment stands in the way of their happiness, however. Her father, for example, takes a violent dislike to Bandy - even before Bandy blows up Cyril Chaffington's hotel. And then who should turn up but the diminutive Dasha, the former Bolshevik (sort of) nurse whom Bandy married (sort of) in Russia, where she betrayed him (more or less) to the mercy (or lack thereof) of the Red Cavalry.

Between sorting all of this out, carrying airmail, and trying to start his own aviation business while dodging flappers and bootleggers, Bandy hardly has time to be a silent movie star...

This edition includes Banner's Headline, a radio play by Donald Jack published here for the first time. In it we discover what happens when Arthur Banner, a rocket scientist, gets passed over for promotion one too many times, and decides to resign to work on a project of his own.
Visa hela texten