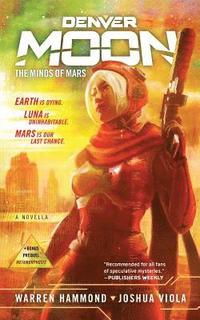 The Minds of Mars (Book One)

Once considered humanity?s future home, Mars hasn?t worked out like anybody hoped. Plagued by crime and a terraforming project that's centuries from completion, Mars is a red hell.

Twenty-year-old revelations force Denver on a quest for truth, but Tatsuo's former friend, Cole Hennessy, leader of the Church of Mars, has other plans and will stop at nothing to keep Denver from disclosing Tatsuo's secrets to the world.

Hell-bent on reclaiming her grandfather's legacy, Denver?along with her AI implant, Smith, companion android, Nigel, and shuttle pilot, Navya?set out on a quest to find the answers they hope will shed light on the church's true agenda, the origin of red fever, and the mysteries surrounding Tatsuo's tragic death.
Visa hela texten

"this novella is recommended for all fans of speculative mysteries."

"take the mars of Total Recall, the cybertech of Ghost in the Shell, the noir of Blade Runner, the action of Cowboy Bebop, and accelerate them to twelve times Earth escape velocity, then you will find yourself with the pure awesome joy that is Denver Moon."

“Denver Moon: The Minds of Mars combines Blade Runner and the original Total Recall with a dash of old-school detective noir that is hard to put down and leaves the reader wanting more.”

"this is mars done as well as elton john did it, as well as john carpenter did it, as well as Total Recall did it. Move over, Andy Weir. Step aside, John Carter. Denver Moon is swaggering into this red landscape, and her footprints in the dust, they're going to last a few generations, I'd say."

“a searing mystery with a superlative, gun-toting protagonist.”

“Denver Moon: The Minds of Mars is noir sci-fi at its best. A powerful story that is hard to put down and highly recommended for mystery and sci-fi fans alike.”

"crisp and compellingly told, Denver Moon is a high-tech, mystery-packed tale of our Mars-colonized tomorrow. Fans of Andy Weir and James S.A. Corey should take note."

“a tense story of a well-imagined mars where belief is more powerful than a gun.”

“with a richly imagined and well-balanced mixture of mickey spillane and philip k. dick, the stories of denver moon deliver thought-provoking excitement, cunning twists, and deeply human characters (even the androids!). put this on your must-read list.”