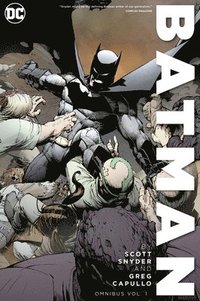 av Scott Snyder
Inbunden Engelska, 2019-11-05
1503
Köp
Spara som favorit
Scott Snyder's best-selling iconic Batman run gets collected in an omnibus format for the first time! Scott Snyder and Gregg Capullo's Batman stories - from Court of Owls to Zero Year - are presented together in this hard cover omnibus collection. Batman discovers a vast conspiracy with roots deep in the past of Gotham city. From the Court of Owls to the Joker, this collection covers a range of foes both old and new as readers follow Batman's adventures from the pen of Scott Snyder. Collects Batman #1-33.
Visa hela texten

Scott Snyder is a #1 New York Times best-selling writer and one of the most critically acclaimed scribes in all of comics. His works include Dark Nights: Metal, All Star Batman, Batman, Batman: Eternal, Superman Unchained, American Vampire and Swamp Thing. He has also been published in Zoetrope, Tin House, One-Story, Epoch, Small Spiral Notebook and other journals, and has a short-story collection, Voodoo Heart, which was published by Dial Press. He teaches at Columbia University and Sarah Lawrence University and lives in New York with his wife, Jeanie, and his son, Jack Presley.