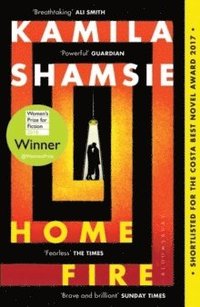 WINNER OF THE WOMEN'S PRIZE FOR FICTION 2018

av Kamila Shamsie
(2 röster)  |  Läs 1 recension
Häftad Engelska, 2018-03-22
91
Köp
Spara som favorit
Finns även som
Visa alla 1 format & utgåvor
_______________ WINNER OF THE WOMEN'S PRIZE FOR FICTION WINNER OF THE LONDON HELLENIC PRIZE A BOOK OF THE YEAR IN THE GUARDIAN, OBSERVER, TELEGRAPH, NEW STATESMAN, EVENING STANDAND AND NEW YORK TIMES _______________ 'The book for our times' - Judges of the Women's Prize 'Elegant and evocative ... A powerful exploration of the clash between society, family and faith in the modern world' - Guardian 'Builds to one of the most memorable final scenes I've read in a novel this century' - New York Times _______________ Isma is free. After years spent raising her twin siblings in the wake of their mother's death, she is finally studying in America, resuming a dream long deferred. But she can't stop worrying about Aneeka, her beautiful, headstrong sister back in London - or their brother, Parvaiz, who's disappeared in pursuit of his own dream: to prove himself to the dark legacy of the jihadist father he never knew. Then Eamonn enters the sisters' lives. Handsome and privileged, he inhabits a London worlds away from theirs. As the son of a powerful British Muslim politician, Eamonn has his own birthright to live up to - or defy. Is he to be a chance at love? The means of Parvaiz's salvation? Two families' fates are inextricably, devastatingly entwined in this searing novel that asks: what sacrifices will we make in the name of love? A contemporary reimagining of Sophocles' Antigone, Home Fire is an urgent, fiercely compelling story of loyalties torn apart when love and politics collide - confirming Kamila Shamsie as a master storyteller of our times. _______________ NOW A BBC RADIO 4 BOOK AT BEDTIME SHORTLISTED FOR THE INTERNATIONAL DUBLIN LITERARY AWARD SHORTLISTED FOR THE COSTA NOVEL AWARD 2017 SHORTLISTED FOR THE DSC PRIZE FOR SOUTH ASIAN LITERATURE 2018 LONGLISTED FOR THE MAN BOOKER PRIZE 2017
Visa hela texten

Occasionally you know that one of the writers alive at the same time as you has written the book they were born to write ... Home Fire has lit a light that'll never go out; Shamsie's version of Antigone reveals the ancient tragedy we're living now -- Ali Smith * Guardian, Books of the Year * A modern retelling of Antigone set among a family divided by politics, love, and radicalism. In fewer than 300 pages, it managed to do all the things I want novels to do - tell me something about the world, give me a tiny glimpse into the otherness of others, and, most of all, give me that ache of longing as I turned the last page and realised I would never meet these characters again -- Tahmima Anam * Observer, Best Books of the Year * Why do some people become radicalised? It's a question I've explored with experts on-air, but perhaps fiction can provide greater insight. Kamila Shamsie's powerful novel Home Fire, inspired by Sophocles's Antigone, did just that -- Martha Kearney * Observer, Best Books of the Year * I very much enjoyed and admired Home Fire by Kamila Shamsie, a politically and psychologically acute novel modelled on Sophocles's Antigone - but reworked as the story of two British Muslim sisters and their jihadist brother -- Emily Wilson * New Statesman, 'Books of the Year' * I enjoyed Kamila Shamsie's Man Booker-longlisted Home Fire, which does a great job of bringing Sophocles's Antigone into the world of Skype and Isis. Shamsie's writing resonates on the human, political and lyrical plane but its topicality, tight plot and vivid characterisation also suggest a film script in the making -- Melissa Benn * New Statesman, 'Books of the Year' * Seeking a template for these dark and strange days many works have modernised Greek dramas ... A particularly classy example was Home Fire, in which Kamila Shamsie relocates Antigone by Sophocles to Western and Eastern capitals during the "war on terror" -- Mark Lawson * New Statesman, Books of the Year 2017 * Anchors newsy debates in characters whose motives we would rather shrink from ... Home Fire persuasively retold Antigone as the story of a teenage Londoner groomed to join Isil -- Anthony Cummins * Telegraph, Books of the Year * The fiery new novel by Kamila Shamsie, Home Fire, which takes us from the suburban streets of Wembley to the killing grounds of Islamic State-ravaged Raqqa. Shamsie tackles issues of terrorism, political showboating and jihadi recruitment in London through the prism of a classic two-sides-of-the-track love story -- George Osborne * Evening Standard, Books of the Year * Here comes Kamila Shamsie's astonishing Home Fire, speaking ancient and brand-new truth to the world ... A novel so breathtaking in the calm and witty and unshowy and inexorable telling of its story that, as I was reading it, I kept finding myself not sitting on the sofa any more reading the book but somehow standing in the kitchen wondering why on earth I'd gone through to the kitchen, what for? And realising it was that I'd kept having to put the book I was reading down and leave the room, and as soon as I realised where I was and where I wasn't, I was off, back to the grip of the book again ... The result is powerful, and in this making of a new home for the old story of the small girl who takes it upon herself to speak truth to power, she produces what I think you can truly call a contemporary classic -- Ali Smith Home Fire left me awestruck, shaken, on the edge of my chair, filled with admiration for her courage and ambition. Recommended reading for prime ministers and presidents everywhere -- Peter Carey Elegant and evocative ... A powerful exploration of the clash between society, family and faith in the modern world, tipping its hat to the same dilemma in the ancient one * Guardian * Two families' fates are devastatingly entwined in this searing novel that asks: what sacrifices will we make in the name of love? * Irish Times * Builds to one of the most memorable final scene