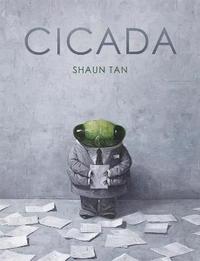 av Shaun Tan
Inbunden Engelska, 2018-11-15
3-6 år
174
Köp
Spara som favorit
Finns även som
Visa alla 1 format & utgåvor
A stunning picture book for anyone who has ever felt unappreciated, from Shaun Tan, Academy Award winner and winner of the Kate Greenaway Medal 2020. Cicada work in tall building. Data entry clerk. Seventeen year. No sick day. No mistake. Tok Tok Tok! Cicada works in an office, dutifully working day after day for unappreciative bosses and being bullied by his co-workers. But one day, something truly extraordinary happens . . . A story for anyone who has ever felt unappreciated, overlooked or overworked but dreams of magic, from Australia's most acclaimed picture book creator, and first BAME winner of the Kate Greenaway Medal. This is Shaun Tan's first author-illustrator book in five years, and his most important and moving fable since The Arrival.
Visa hela texten

Cicada by Shaun Tan is another picture book for older readers. Cicada toils in a cold grey office: he's segregated, dismissed and ignored despite his diligence....and after putting in years of thankless work, he is packed off without a pension. When can the future offer him? The story's stark simplicity overlays great depths, exploring themes of acceptance, self-worth and meaningfulness of work, all culminating in escape to a forest world of extraordinary lushness. -- Imogen Russell Williams * The Guardian * A different kind of worker comes in the form of Cicada, an unhappy data-entry clerk abused by his human bosses and co-workers. The latest from the Australian author Shaun Tan, who won an Academy award for the 2011 film adaptation of his picture book The Lost Thing, Cicada (Hachette Children's, GBP14.99) is an unusual picture book with an almost entirely grey palette (apart from the green of the insect), and it features a distinct rhythm: "Cicada work in tall building. /Data entry clerk. Seventeen year./ No sick day. No mistake./ Tok Tok Tok!" It's a timely book, given its theme of worker exploitation, and as such is perhaps best suited to readers aged six and up, for whom it could be a starting point for discussing human rights. It's not all bleak though; it has a wild and surprising ending, with the cicada having the last laugh. * The Observer *

Shaun Tan is the author and illustrator of The Lost Thing, The Red Tree and The Arrival, all of which have won numerous international awards. The Lost Thing animation recently won an Oscar for the best animated short film. The Arrival won Shaun the Bologna Ragazzi Prize and Picture Book of the Year from CBCA 2007 amongst others. Shaun's books have been widely translated. In 2001 Shaun received the 'World Fantasy Best Artist Award' for his body of work. Shaun is the winner of the 2011 Astrid Lindgren prize, the world's richest children's literature award. The award described Shaun as 'a masterly visually storyteller'.