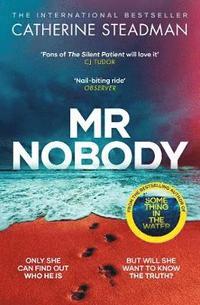 av Catherine Steadman
Häftad Engelska, 2020-09-17
104
Köp
Spara som favorit
Skickas inom 5-8 vardagar.
Fri frakt inom Sverige över 159 kr för privatpersoner.
Finns även som
Visa alla 5 format & utgåvor
FROM THE INTERNATIONALLY BESTSELLING AUTHOR OF SOMETHING IN THE WATER - MEMENTO MEETS SHARP OBJECTS IN THIS GRIPPING NEW THRILLER 'Fans of The Silent Patient will love it' CJ TUDOR 'Very clever, brilliantly compelling' BA PARIS 'Original, ingenious and utterly gripping' JP DELANEY 'Had me racing through the pages' SARAH VAUGHAN The past holds its power over them . . . He wants to remember. She needs to forget. A man is found barefoot and barely conscious on an empty Norfolk beach in the middle of January. He is unable to speak and without identification. Interest in the case is sparked immediately. At the hospital they see him as a medical mystery. The press calls him Mr Nobody, and everybody wants answers. Who is he? And what happened to him? When neuropsychiatrist Dr Emma Lewis is asked to find out, it's the opportunity of a lifetime. It also means returning to the small town in Norfolk she was forced to leave fourteen years ago. Pushing bad memories aside, she is determined to help her new patient. A man who doesn't remember, and a woman who remembers too much. He shouldn't know anything about her. Especially not that. In this compelling new thriller, Catherine Steadman explores the human mind, moral dilemmas and hidden secrets. Her previous thriller, Something in the Water, was a Reese Witherspoon Bookclub pick in 2018 and a Richard & Judy Book Club pick in 2019. PRAISE FOR MR NOBODY 'An enjoyable, nail-biting ride' Observer 'Original, ingenious and utterly gripping, with characters you'll really care about as they race towards the brilliantly unexpected ending' JP Delaney 'From the intriguing opening to the shocking ending, I loved it...' CJ Tudor 'Very clever, brilliantly compelling, another amazing read from Catherine Steadman' BA Paris 'A highly imaginative tale tinged with Hitchcockian tension and kinetic pacing... Deliciously provocative... Delightfully compelling' Washington Post 'Perfectly paced with an exciting race to the end, this is one clever novel' Woman's Weekly
Visa hela texten

Catherine Steadman is an actress and writer based in North London. She is known for her roles in Downton Abbey and Tutankhamun, starring alongside Sam Neill, as well as shows including Breathless, The Inbetweeners, The Tudors, and Fresh Meat. In 2017 Catherine will feature in political thriller Fearless and new BBC comedy Bucket. She also has appeared on stage in the West End including Oppenheimer for the RSC, for which she was nominated for a 2016 Laurence Olivier Award.