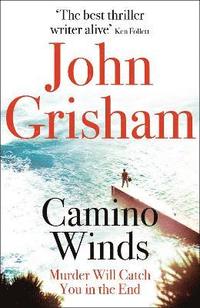 av John Grisham
Häftad Engelska, 2021-01-07
89
Köp
Spara som favorit
Skickas inom 7-10 vardagar.
Gratis frakt inom Sverige över 159 kr för privatpersoner.
Finns även som
Visa alla 2 format & utgåvor
The Sunday Times bestseller from international bestseller John Grisham. Is a Perfect Storm the Perfect Time for a Murder? 'Another gem from John Grisham' Observer When Hurricane Leo threatens Florida's Camino Island, the Governor is quick to issue an evacuation order. Most residents flee but a small group of diehards decide to ride it out. Amongst them is Bruce Cable, proprietor of Bay Books in downtown Santa Rosa. The hurricane is devastating: homes and condos are levelled, hotels and storefronts ruined, streets flooded, and a dozen people are killed. One of the victims is Nelson Kerr, a friend of Bruce's who wrote timely political thrillers. But evidence suggests that the storm wasn't the cause of Nelson's death - he had received several mysterious blows to the head. Who would want Nelson dead? The local police are overwhelmed with the aftermath of the storm and in no condition to handle the case. Bruce begins to wonder if the shady characters in Nelson's novels were more fact than fiction. And somewhere on Nelson's computer is the manuscript of his new novel - could the key to the case be right there, in black and white? Bruce starts to look into it and what he finds between the lines is more shocking than any of Nelson's plot twists - and far more dangerous. Gripping, compelling and pacy, this exceptional thriller from international bestseller John Grisham is the perfect escapist read this summer. Praise for Camino Winds: 'In American icon John Grisham's new novel, Camino Winds, an odd assortment of mystery and crime authors, some of them felons themselves, discover one of their colleagues has been murdered during the fury of a massive hurricane-the perfect crime scene' Delia Owens, author of Where the Crawdads Sing 'The Camino Island series, featuring trouble-prone bookseller Bruce Cable, is a perfect escapist mix of detective action, insider riffs on the literary world - and even a little romance' Mail on Sunday 'Camino Winds has all the usual Grisham hallmarks - a pacy plot and tension-filled scenes' Independent 'Another compelling read from Grisham, and will satisfy old fans and please new readers alike' Press Association 'The novel has enough plot twists to keep you engaged' The Herald 350+ million copies, 45 languages, 9 blockbuster films: NO ONE WRITES DRAMA LIKE JOHN GRISHAM
Visa hela texten

John Grisham as a child dreamed of being a professional baseball player. After graduating from law school at Ole Miss in 1981, he went on to practice law for nearly a decade, specialising in criminal defense and personal injury litigation. One day, Grisham overheard the harrowing testimony of a twelve-year-old rape victim and was inspired to start a novel exploring what would have happened if the girl's father had murdered her assailants. Getting up at 5 a.m. every day to get in several hours of writing time before heading off to work, Grisham spent three years on A Time to Kill and finished it in 1987. His next novel, The Firm, spent 47 weeks on The New York Times bestseller list and became the bestselling novel of 1991. Since then, he has written one novel a year, including The Client, The Pelican Brief, The Rainmaker and The Runaway Jury. Today, Grisham has written a collection of stories, a work of non-fiction, three sports novels, seven kids' books, and many legal thrillers. His work has been translated into 45 languages. He lives near Charlottesville, Virginia.