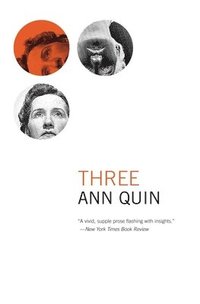 "A continuously interesting, beautifully written, rather venturesome novel of a literary artist... " -- Choice "Quin has this talent for throwing off ripples of association... her best quality, her subconscious quality." -- Alan Burns "Three has been made rather then begotten, and it is forever flirting with an elegant and obscure symbolism." -- Times Literary Supplement

Ann Quin, one of the best kept secrets of British experimental writing, has garnered comparisons to such diverse writers as Samuel Beckett and Nathalie Sarraute. Before her death in 1973, she published four novels, including "Berg" and "Passages". In 1964 she became the first female recipient of the D. H. Lawrence Fellowship which allowed her to travel to the U.S., a trip that provided the basis for "Tripticks".