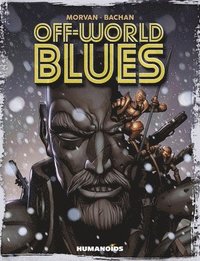 av Jean-David Morvan
Häftad Engelska, 2019-09-17
199
Köp
Spara som favorit
On New Year's Eve 2999, a peacekeeping troop ship is violently attacked. Out of 3,000 soldiers aboard, only six survive, the remnants of an all-female commando team. Battling deadly adversity, they manage to land on the planet they had departed 16 years earlier, after brokering a careful truce between the human colony and the native alien population, only to discover it now fractured by hostile indigenous freedom fighters and the human warring faction. Meanwhile, the shadow of rogue Captain Nirta Omirli - who rallied the colonists to his cause - still looms large over the planet, despite having being executed 24 years previously...
Visa hela texten

Jean-David Morvan in a French comic writer. He studied art, however, he quickly discovered that his true strength was in storytelling and changed focus to writing. With multiple nominations for the Youth Award at the Angouleme International Comics Festival and at Prix Saint-Michel in Belgium, he has won both in 2006 and 2007 respectively. Bachan is a Mexican comic artist. He got his start in comics by creating comic adaptations of novels then published fanzines. He is most known to American fans for his work with DC Comics with 'Doom Patrol Silver Age' and 'Justice League'.