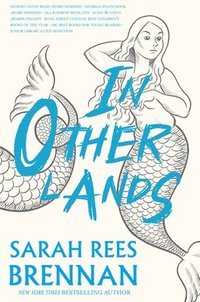 av Sarah Rees Brennan
Häftad Engelska, 2019-08-22
159
Köp
Spara som favorit
Skickas inom 5-8 vardagar.
Gratis frakt inom Sverige över 159 kr för privatpersoner.
Finns även som
Visa alla 1 format & utgåvor
Georgia Peach Award Nominee Florida Teens Read Award Nominee ABC Best Books for Young Readers Bank Street College Best Children's Books of the Year A Junior Library Guild Selection Hugo & Locus award finalist The Borderlands aren't like anywhere else. Don't try to smuggle a phone or any other piece of technology over the wall that marks the Border - unless you enjoy a fireworks display in your backpack. (Ballpoint pens are okay.) There are elves, harpies, and - best of all as far as Elliot is concerned - mermaids. "What's your name?" "Serene." "Serena?" Elliot asked. "Serene," said Serene. "My full name is Serene-Heart-in-the-Chaos-of-Battle." Elliot's mouth fell open. "That is badass." Elliot? Who's Elliot? Elliot is thirteen years old. He's smart and just a tiny bit obnoxious. Sometimes more than a tiny bit. When his class goes on a field trip and he can see a wall that no one else can see, he is given the chance to go to school in the Borderlands. It turns out that on the other side of the wall, classes involve a lot more weaponry and fitness training and fewer mermaids than he expected. On the other hand, there's Serene-Heart-in-the-Chaos-of-Battle, an elven warrior who is more beautiful than anyone Elliot has ever seen, and then there's her human friend Luke: sunny, blond, and annoyingly likeable. There are lots of interesting books. There's even the chance Elliot might be able to change the world. In Other Lands is the exhilarating new book from beloved and bestselling author Sarah Rees Brennan. It's a novel about surviving four years in the most unusual of schools, about friendship, falling in love, diplomacy, and finding your own place in the world - even if it means giving up your phone.
Visa hela texten

"In Other Lands is at once a classic school story, a coming-of-age tale and a parody of Harry Potter. It's hilarious and sneakily moving. Elliot Schafer is Harry Potter if Harry had been abandoned instead of merely orphaned. Convinced of his unlovability, he wields sarcasm and braininess as weapons. . . . Brennan subverts the familiar Y.A. love triangle in uproarious, touching, unexpected ways, and her commentaries on gender roles, sexual identity and toxic masculinity are very witty. Elven culture, for instance, views men as the weaker sex. "A true gentleman's heart is as sacred as a temple, and as easily crushed as a flower," Serene informs Elliot. When another elf tells him, "I was saddened to hear Serene had launched a successful attack on the citadel of your virtue," Elliot assures her, "The citadel was totally into surrendering." Best of all, over four years in the otherlands, Elliot grows from a defensive, furious, grieving child into a diplomatic, kind, menschy hero." - New York Times Book Review "It has been a long time since I've loved a book this much." - Seanan McGuire, author of Every Heart a Doorway "Sarah Rees Brennan's brand-new novel, In Other Lands, was first published in serial installments on the author's blog, where the story became so popular she decided to make a book out of it. It's easy to see why: The young adult fantasy author is known for her delightful characters, and In Other Lands' hero, Elliott, is a precocious, snarky wunderkind who's whisked away to wizarding school, where he's given his choice of becoming a warrior or a diplomat. But Elliott has his two best friends at his side - one a matriarchal elf princess, the other a quiet jock with a secret - and he isn't about to play by the rules. If you enjoy stories about magical boarding schools, In Other Lands is a treat. It's full of romance in all directions, plenty of fantasy trope subversions, Brennan's typical insouciant wit."- Vox "This takes on the portal fantasy with a good dose of silliness, but also draws complex, captivating characters." - Danika Leigh Ellis, Vulture "The four sections of the novel each follow a year in Elliot's life, from when he comes to the Borderlands to when he, Serene, and Luke graduate the training camp. The reader follows conflicts both political and personal, watching Elliot grow into himself and his skills as he turns the politics of the world around him on their head one small maneuver at a time. He isn't, of course, a savior figure; he also isn't magically gifted. He's just dedicated, smart, and willing to risk himself to better the world around him. It's a delightful look at how personal and how influential politics can be: Brennan isn't saying that one person can change the world, but she's showing how one person can push it in the right direction if they try hard enough." - Brit Mandelo, tor.com "Above all, In Other Lands is a novel about growing up and growing into oneself, a task that is ultimately more difficult than dealing with unicorns or negotiating treaties with harpies." -Electra Pritchett, Strange Horizons "I have rewritten the first paragraph of this review a half-dozen times, trying to find some way to make clear that Sarah Rees Brennan has created a nearly perfect YA fantasy without gushing. I can't do it. In Other Lands is brilliantly subversive, assuredly smart, and often laugh-out-loud funny. It combines a magic-world school setting with heaps of snark about everything from teen romance to gender roles, educational systems and serious world diplomacy." - Locus "This brilliant novel becomes more and more intense and funny and engaging with each page and is so utterly enjoyable that it was the easiest thing in the world for me to fall in love with it. This is what we need more of in YA fantasy, this is what we need more of in YA fiction. Buy the book, read the book, recomme

Sarah Rees Brennan was born, raised, and lives in Ireland. She is the New York Times bestselling author of Tell the Wind and Fire, the Lynburn Legacy series, and Season of the Witch (The Chilling Adventures of Sabrina, Book 1), among others.