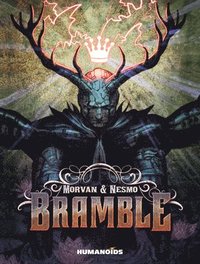 av Jean-David Morvan
Inbunden Engelska, 2019-10-29
239
Köp
Spara som favorit
When a mysterious giant of a man arrives in a vast steampunk megalopolis, death walks beside him, leaving a trail of corpses in their wake. It's up to a dysfunctional yet dogged police investigator to find the strange colossus and stop him before the bodies pile even higher... But soon the truth is discovered that this case is far more complicated than the detective could've possibly conceived: a veritable battle between nature and city is unfolding, whose very outcome could forever change the face of the earth.
Visa hela texten

Jean-David Morvan in a French comic writer. He studied art, however, he quickly discovered that his true strength was in storytelling and changed focus to writing. With multiple nominations for the Youth Award at the Angouleme International Comics Festival and at Prix Saint-Michel in Belgium, he has won both in 2006 and 2007 respectively.