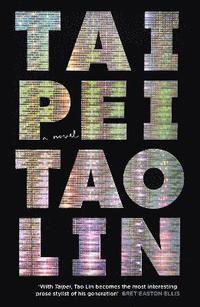 av Tao Lin
(2 röster)
Häftad Engelska, 2013-07-04
124
Köp
Spara som favorit
Finns även som
Visa alla 3 format & utgåvor
At some point, maybe twenty minutes after he'd begun refreshing Twitter, Tumblr, Facebook, Gmail in a continuous cycle - with an ongoing, affectless, humorless realisation that his day 'was over' - he noticed with confusion, having thought it was early morning, that it was 4:46PM Taipei is an ode - or lament - to the way we live now. Following Paul from New York, where he comically navigates Manhattan's art and literary scenes, to Taipei, Taiwan, where he confronts his family's roots, we see one relationship fail, while another is born on the internet and blooms into an unexpected wedding in Las Vegas. From one of this generation's most talked-about and enigmatic writers comes a deeply personal and uncompromising novel about memory, love, and what it means to be alive.
Visa hela texten

The most interesting prose stylist of his generation -- Bret Easton Ellis Lin's writing is reminiscent of early Douglas Coupland, or early Bret Easton Ellis, but there is also something going on here that is more profoundly peculiar, even Beckettian . . . deliciously odd * * Guardian * * Moving and necessary, not to mention frequently hilarious -- Miranda July, author of No One Belongs Here More Than You Lin is a 21st century literary adventurer . . . [Taipei] is a fascinating book, bone dry, repellant, painful, but relentlessly true to life -- Frederick Barthelme, author of Waveland A Kafka for the iPhone generation . . . Tao Lin may well be the most important writer under thirty working today -- Clancy Martin [A] deadpan literary trickster * * New York Times * * Alienation, obsession, social confusion, drugs, the internet, sex, food, death - [are] rendered here with a calm intuition . . . a work of vision so relentless it forces most any reader to respond -- Blake Butler, author of Sky Saw A strange, hypnotic, memoir-reeking novel that is equal parts dissociative and heartbreaking, surreally hallucinogenic and grittily realist, ugly and beautiful -- Porochista Khakpour, author of Sons and Other Flammable Objects Deeply smart, funny, and heads-over-heels dedicated * * New York Magazine * * Lin captures certain qualities of contemporary life better than many writers in part because he dispenses with so much that is expected of current fiction * * London Review of Books * * Tao Lin is the most distinctive young writer I've come upon in a long time: the most intrepid, the funniest, the strangest. He's a new voice, and the pleasure of reading his work is a new kind of pleasure -- Brian Morton, author of Starting Out in the Evening [Tao Lin's] relentless, near-autistic focus on the surfaces of social interaction belongs to a literary lineage that includes not just the frequently cited Bret Easton Ellis but also Alain Robbe-Grillet, Rudy Wurlitzer, and Dennis Cooper * * The Village Voice * * Such a committed engagement with emotional failure risks literary disappointment, but it is through Lin's willingness to take that risk that we see him for what he is: a daring, urgent voice for a malfunctioning age -- Sam Byers * * Times Literary Supplement * * Taipei brilliantly portrays the life of many young men - drifting and difficult to reach, bound only to technology and drugs * * Financial Times * * Like all true styles this is infectious stuff, permeating not only writing, but thought itself * * Daily Telegraph * * Taipei is undoubtedly an important signpost for the way the next generation is going to think and act in the world to come * * Big Issue * * His strengths, and appeal, lie in the untrammelled paths he makes where others are too fearful to tread -- Rob Sharp * * The National * * With a neat line in offbeat analogy, Lin's writing is more intricate, even beautiful, than you might expect, and as a portrait of an internet-shaped psyche, it's unmatched -- Anthony Cummins * * Observer * * A wry, clever look at the way we live now, written in a wonderfully inventive, up-itself Manhattan style -- Kate Saunders * * The Times * * Like a piece of contemporary art . . . smuggled in among the Tumblr updates and Ritalin dosages are moments of sudden clarity, tenderly and poetically rendered, in which Lin captures perfectly the unmoored inadequacy we feel as we struggle to place ourselves in the world. * * Literary Review * *

Tao Lin is the author of the novels Richard Yates and Eeeee Eee Eeee, the novella Shoplifting from American Apparel, the story collection Bed, and the poetry collections cognitive-behavioral therapy and you are a little bit happier than i am. He is the founder and editor of the literary press Muumuu House. His work has been translated to twelve languages and he lives in Manhattan. taolin.us Follow @tao_lin on Twitter