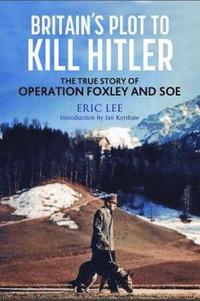 The True Story of Operation Foxley and SOE

av Eric Lee
Inbunden Engelska, 2022-04-30
208
Köp
Spara som favorit
Kan levereras innan julafton!
Finns även som
Visa alla 2 format & utgåvor
Operation Foxley was the name of the secret plan supported by Winston Churchill to assassinate Hitler in 1944-45. More than 75 years after its conception, the assassination plan remains shrouded in mystery. Eric Lee's new book is the product of painstaking research and sheds more light on this plan. Lee also asks what would have happened if Foxley had been executed successfully. Concocted in 1944 by the British Special Operations Executive (SOE), Foxley's objective was to kill Hitler and any high-ranking Nazis or members of the Fuhrer's entourage who might have been present at the time. Different methods of assassination had been considered by the SOE, but were ultimately deemed too complicated. These methods included derailment and destruction of the Hitler's personal train, the Fuhrerzug, by explosives, and also clandestine means such as slipping a tasteless poison into Hitler's drinking and cooking water. Some of the ideas were considered quite bizarre, including one scheme to hypnotise Rudolf Hess and return him to Germany to kill Nazi leaders. The Americans and Soviets had their own plans to kill Hitler too, with some equally strange ideas (including injecting female hormones into the Fuhrer's vegetables). Eventually, after intel gathered revealed that Hitler took a routine, solitary walk every morning to the Teehaus on the Mooslahnerkopf Hill from the Berghof residence, a plan was created to assassinate Hitler using a sniper rifle fitted with a silencer. A perfect investigation for readers who enjoy reading about modern historyl, and the Second World War in particular. It is also tailored to those with an interest in the secret war , covering topics like the SOE, and military intelligence.
Visa hela texten

Eric Lee is a London-based journalist and author. He has written several works of modern history including Saigon to Jerusalem: Conversations with Israel's Vietnam Veterans (1991); Operation Basalt: The British Raid on Sark and Hitler's Commando Order (2016); The Experiment: Georgia's Forgotten Revolution (2018); and Night of the Bayonets: The Texel Uprising and Hitler's Revenge (2020). His books have been translated into Czech, Dutch, Esperanto, Georgian, German, Korean, and Russian.