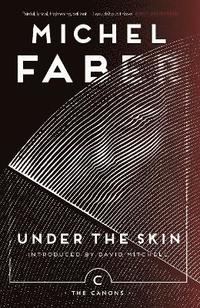 av Michel Faber
Häftad Engelska, 2017-07-06
129
Köp
Spara som favorit
Skickas inom 5-8 vardagar.
Fri frakt inom Sverige för privatpersoner.
Finns även som
Visa alla 3 format & utgåvor
With an introduction by David Mitchell Isserley spends most of her time driving. But why is she so interested in picking up hitchhikers? And why are they always male, well-built and alone? An utterly unpredictable and macabre mystery, Under the Skin is a genre-defying masterpiece.
Visa hela texten

A wonderful book - painful, lyrical, frightening, brilliant . . . I couldn't put it down -- Kate Atkinson One of the best-orchestrated reveals in modern British fiction . . . Michel Faber is a masterly writer -- David Mitchell Profound and disturbing . . . Faber writes superbly * * Sunday Times * * This is a man who could give Conrad a run at writing the perfect sentence * * Guardian * * Teases and prods the reader up a plethora of literary blind alleys before hauling them screaming towards its final, thrilling destination * * Daily Telegraph * * Strange, adept, original . . . Would that more first novels were as adventurous or as funky and daring in their conception * * Independent on Sunday * * A brilliantly compressed drama of threat and ambiguity . . . Recalling writers such as Jim Crace and Russell Hoban, Under the Skin, like Faber's short stories, is an extremely assured and imaginative work * * Observer * * Astonishingly, this is Michel Faber's first novel. It is audacious, fascinating, repellent and quite unlike anything I have ever read * * Mail on Sunday * * Under the Skin is a shocking and fantastical take on modern humanity * * The Week * * The fantastic is so nicely played against the day-to-day that one feels the strangeness of both . . . A remarkable novel * * New York Times * *

Bloggat om Under The Skin

Michel Faber has written nine other books. In addition to the Whitbread-shortlisted Under the Skin, he is the author of the highly acclaimed The Crimson Petal and the White, The Book of Strange New Things, which was shortlisted for the Arthur C. Clarke Award and won the Saltire Book of the Year Award 2015, and most recently Undying, his first poetry collection. Born in Holland, brought up in Australia, he now lives in the UK.