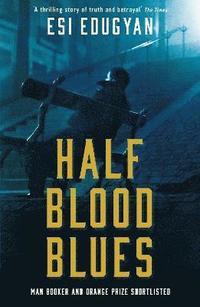 Shortlisted for the Man Booker Prize 2011

av Esi Edugyan
(1 röst)
Häftad Engelska, 2018-08-02
119
Köp
Spara som favorit
Finns även som
Visa alla 1 format & utgåvor
Chip told us not to go out. Said, don't you boys tempt the devil. But it been one brawl of a night, I tell you. The aftermath of the fall of Paris, 1940. Hieronymous Falk, a rising star on the cabaret scene, was arrested in a cafe and never heard from again. He was twenty years old. He was a German citizen. And he was black. Fifty years later, Sid, Hiero's bandmate and the only witness that day, is going back to Berlin. Persuaded by his old friend Chip, Sid discovers there's more to the journey than he thought when Chip shares a mysterious letter, bringing to the surface secrets buried since Hiero's fate was settled. In Half Blood Blues, Esi Edugyan weaves the horror of betrayal, the burden of loyalty and the possibility that, if you don't tell your story, someone else might tell it for you. And they just might tell it wrong ...
Visa hela texten

'A superbly atmospheric prologue kick-starts a thrilling story about truth and betrayal... [a] brilliant, fast-moving novel.' -- Kate Saunders * Times * This is a wonderful, vibrant, tense novel about war and its aftermath. Its author has brought both the wartime past of a devastated city and its confident reinvention of itself in a new era to life with extraordinary assurance. -- Susan Hill * Man Booker Prize judge * Edugyan really can write ... redemptive -- Bernadine Evaristo * Guardian *

Esi Edugyan's Washington Black has been shortlisted for the Man Booker Prize 2018 and The Scotiabank Giller Prize 2018. Her previous novel, Half Blood Blues won the Scotiabank Giller Prize and was a finalist for the Man Booker Prize, the Governor-General's Literary Award, the Rogers Writers' Trust Prize, and the Orange Prize. She lives in Victoria, British Columbia