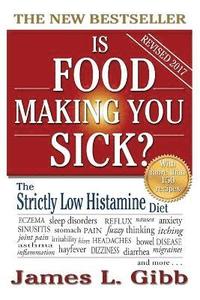 Is Food Making You Sick?

av James L Gibb
Häftad Engelska, 2014-02-18
381
Köp
Spara som favorit
Finns även som
Visa alla 1 format & utgåvor
People all over the world suffer from histamine intolerance without being aware of it.We itch, sneeze, suffer from joint pain, inflammation, sleep disorders, irritability, anxiety, bowel disease, diarrhea, flatulence, stomach pain, heartburn and acid reflux, nausea, bloating and other digestive problems, eczema, psoriasis, tissue swelling, urticaria (hives), itching skin, itching scalp, sinusitis, runny nose, puffy eyes, hay fever, asthma, and breathing difficulties, or endure tension headaches, migraines, fuzzy thinking, dizziness, irregular heartbeat, painful periods (women), sudden drops in blood pressure, faintness or flushing, immediately after the consumption of histamine-rich foods, or many hours afterwards. Histamine is colorless, odorless and tasteless - invisible and undetectable except by scientific analysis, and yet crucial to our well-being.Individual histamine tolerance thresholds vary greatly. A range of circumstances including our genes, our environment, our diet and stress, cause our bodies' histamine levels to rise. If they rise faster than our bodies can break them down, we experience the excessive inflammation brought on by histamine intolerance, or HIT. The good news is, if we can understand what is happening and why, we can treat or prevent this widely unrecognized condition.By far the best way to treat histamine intolerance is with diet. All foods with the potential to raise histamine levels should be avoided until symptoms improve.This book discusses HIT in depth, including causes, symptoms and therapies, backed by scientific research. Along with a list of foods to help HIT sufferers, it includes a wide range of recipes for everything from entrées to desserts.
Visa hela texten

"in this book, [gibb] shows the results of a wide-ranging investigation of the relationship between nutrition and health, suggesting that hit intolerance may contribute to conditions as disparate as allergies, bowel disease, eczema, heartburn, stomach pain, joint pain, anxiety, psoriasis and sleep disorders, among others. ... his innovative approach is bolstered by careful, thoughtful investigation, and motivated by an urge to help others. ... practical, valuable information that offers a measure of hope for those suffering from a chronic physical condition." - kirkus reviews

James L. Gibb is an Australian educator, novelist and health researcher with a particular focus on food-related diseases. A university graduate with a diploma of education, Gibb became interested in the relationship between nutrition and health when a family member was diagnosed with a chronic disease. He spent many years investigating natural alternatives to the powerful drugs prescribed for this condition, whose side effects can be damaging and debilitating. Over time he accumulated a wealth of information, which culminated in the writing of this book.

'Medical science has made enormous leaps in the 21st century,' writes Gibb, 'and without it, we would all be worse off. Dedicated medical researchers and doctors have improved our quality of life far beyond the standards available to preceding generations. That said, it is sometimes the afflicted themselves, or those closest to them, who are motivated to persevere just that little bit more keenly in pursuit of answers. Often, people with a personal investment in a health problem will stop at nothing to find a solution, seeking far and wide, never giving up.

'One example is the relentless quest of Augusto and Michaela Odone to find a treatment for their son Lorenzo's adrenoleukodystrophy, in the face of skepticism from health professionals. Their experience was later dramatized in the movie 'Lorenzo's Oil'.

'Another example is provided by Elaine Gottschall, whose daughter was diagnosed with severe ulcerative colitis. Medications failed to improve the child's condition, and most doctors dismissed the idea that diet could be in any way associated with this digestive disease. It was a maverick doctor who thought 'outside the box' who finally led Ms Gottschall to a treatment for her daughter. When he died, to preserve his knowledge she wrote a book called 'Breaking the Vicious Cycle', which has been translated into several languages, and is published worldwide.'

'My own experience with a suffering child motivated me to search for answers even in the most unlikely places, which conventional medicine may overlook. Accepted medical opinion is far from infallible, as has been demonstrated from time to time, notably when Dr Barry Marshall swallowed Helicobacter pylori (H. pylori) bacteria to test the theory that they were a cause of peptic ulcer and gastric cancer. The H. pylori theory was ridiculed by scientists and doctors of the 'establishment', who did not believe any bacteria could live in the acidic environment of the stomach. Marshall has been quoted as saying in 1998 that "(e)veryone was against me, but I knew I was right."

'Sometimes it takes an outsider, unblinkered by conventional training, to perceive a truth. ( After all, it was a humble clerk in the Swiss Patents Office who became the father of modern physics.)

'When the Strictly Low Histamine Diet had an almost miraculous effect on my own, seemingly unrelated symptoms I, too felt driven to share this knowledge with others.'